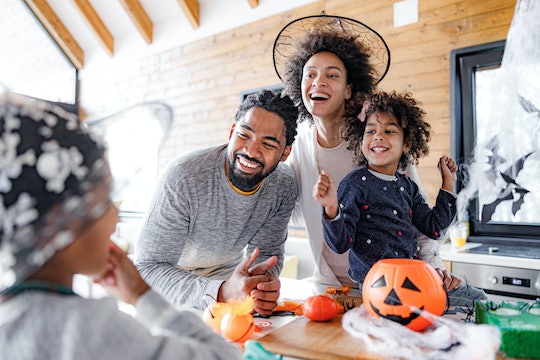 What Exactly Is Halloween? Here’s A Kid-Friendly Breakdown

Why *do* we put lit candles inside pumpkins — after carving faces into them?

Sharing holiday traditions with your kids is one of the joys of parenting, but Halloween can be hard to explain. No other holiday invites you to decorate the house with spooky images of skeletons, spiders, and carved-up pumpkins lit from within. Here’s how to explain Halloween to kids with some help from a Halloween expert, because this holiday’s history is wild. Granted, most children don’t need an excuse to dress up in awesome costumes and ask the neighbors for candy, but a little historical context only adds to the fun.

To learn more about the holiday’s haunted history, Romper spoke with author, screenwriter, and Halloween expert Lisa Morton, the author of Trick or Treat: A History of Halloween and several other spooky works. Here’s what Morton has to say about the weird and wild Halloween traditions still practiced today.

“Halloween started as a Celtic holiday called "Samhain" (pronounced "sow-in"),” says Morton. A lot of their traditions were lost to time because they didn’t leave behind a written history. “We do know that the Irish Celts celebrated their New Year festival on October 31st, and that — because this was a border between years and seasons — they believed that the veil between our world and the ‘otherworld’ of ghosts and fairies was at its thinnest on that night.” Malicious fairies known as the "sidh" (pronounced "shee") could cross over and cause chaos by setting buildings on fire, for instance, as Morton explains.

“When the Catholic missionaries came to Ireland around the sixth century A.D., they moved their celebration of the saints from May 13 to November 1 in order to try and co-opt Samhain,” says Morton. “That original celebration of Samhain — and we do know that the Celts held great banquets and told ghost stories — is where our modern Halloween gets its spookier side.” Many centuries later, those creepy traditions are still around in some form or other.

Next, here’s the history behind some of Halloween’s most iconic symbols.

It all started as a prank. “The Irish and Scottish loved to celebrate Halloween by playing pranks; one of their favorite was to carve turnips (because they didn't have pumpkins) into eerie faces, stick a candle inside, and place the glowing gourd somewhere on Halloween night where it might give someone a scare,” says Morton. “When the Irish and Scottish came to America in the mid-nineteenth-century, they brought their Halloween pranks with them and found the perfect partner in the American pumpkin.” Creepy, glowing pumpkin faces have been part of Halloween ever since. In fact, current creative pumpkin carving ideas include textured, geometric, and even emoji-inspired designs.

What about the peculiar name, though? “The name "jack-o'-lantern" is derived from an ancient folktale about a blacksmith named Jack who tricks the Devil (three times) out of taking his soul, but when he finally dies the Devil doesn't let him in Hell,” explains Morton. “The Devil ends up tossing him a glowing hellfire ember, which Jack keeps in a gourd lantern to light his way as his soul wanders eternally; hence, the name ‘Jack-o'-lantern.’” Tell this spooky folktale to your kids on Halloween night (if you dare).

“Black cats are part of Halloween because of their association with witches; cats were often believed to be witches' ‘familiars’, or demon assistants in animal form,” says Morton. “By the way, in reality witches were frequently just elderly women who lived on the outskirts of a village and likely kept a cat for companionship and mousing.” The cats just got a bad rap. But as people who know more about black cat facts understand, these gorgeous creatures make wonderful friends, and they are considered good luck symbols in many parts of the world.

“Trick-or-treating is not as old as most people think! While there are earlier Halloween traditions that involved costuming and going from house to house — like "souling", practiced in Great Britain on All Souls' Day, or November 2 — the fact is that trick or treat is less than a century old,” says Morton. To modern kids (and many adults), it’s impossible to imagine the holiday without this door-to-door tradition.

Modern trick-or-treating does have a fascinating origin story, though. “It came about as a solution to prank-playing in America, which by the 1930s had become widespread and was so destructive that many cities were considering banning Halloween,” says Morton. (Yes, pranking was extremely popular well before YouTube prank videos went viral.) Civic groups suggested throwing parties to buy off the pranksters, explains Morton. “Because this was during the Great Depression and many households didn't have enough money to spare for Halloween festivities, neighborhoods got together and sent the kids from house to house. The first national magazine mention of trick or treat appears in 1936, although it really took a few more years for the practice to become established throughout the U.S.,” says Morton. Current kids have all sorts of opportunities now, as unique options for trick-or-treating include events at libraries, zoos, and the popular “trunk-or-treating” parties with cars.

Whatever you and your family get up to this October 31, enjoy keeping the holiday spirit alive. “I like to remind folks that when we celebrate Halloween, we're participating in a festival that goes back thousands of years,” says Morton. “Halloween has become a time for us to be creative and to have a few playful scares that make us feel more alive as we move into the dark winter months, and I believe that's why it has lasted for millennia.”

Lisa Morton, author of Trick or Treat: A History of Halloween