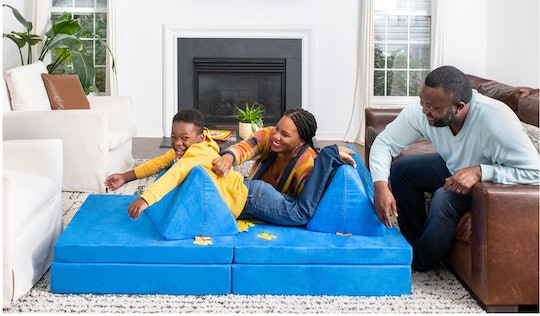 Everything You Need To Know About The Nugget Couch

It's fun furniture you won't mind your kids climbing on.

It seems like in the blink of an eye, your kiddo goes from trying to climb out of their crib to climbing all over your couch. Thing is, some couches aren’t meant for mini mountain goats (i.e. your kids), what with their hard edges or added height from the floor. And then, there’s The Nugget, a couch that’s perfect for playing, sitting, and so much more. But if you’re wondering what the Nugget couch is, be prepared to fall in love with its stylish simplicity.

If it seems like the world has gone nutty for The Nugget couch in the past couple of years, well, they have. There was a substantial increase in the amount of time kids spent at home, which meant parents needed more ways to keep their children entertained. The Nugget couch is just four (count ‘em) four pieces; two longer bottom blocks, and two top blocks that can be a cushion — or whatever your kiddo’s mind can create. Because that’s the beauty of The Nugget; it can convert into anything from a fort to a tent, a place for reading, or putting on a play. Literally, you can transform The Nugget into anything you want, and that’s a huge part of its appeal.

Is the Nugget couch worth it?

Well, that depends on who you’re asking. If it’s any one of the 20,000+ 5-star reviewers on The Nugget’s website, they would probably say yes. As of this writing, The Nugget has over 20,000 5-star reviews on its site. One reviewer wrote: “My kids are obsessed! They use it every day either as a couch or to build with.” Another person gushed: “This thing is life changing… Don’t second guess it. Buy one!” The cool part of The Nugget is that once your child is done playing, you can easily assemble it back into a couch again in a mere minute. (Remember, it’s just four pieces.) Still, a kids’ couch that doubles as an awesome toy doesn’t come cheap, and The Nugget costs $229, so it’s up to families to determine if they want to make that kind of financial investment or not.

If the idea of your kid climbing safely on furniture that’s not your own and being occupied for hours has you sold, you just might decide to try out The Nugget. But as is usually the case when kids are involved, your Nugget will probably be covered in crumbs and dirty handprints before too long. You’ll be happy to know that your Nugget can be tossed into the washing machine once it gets dirty (and it will). The company’s site advises setting your washing machine on cold, and washing Nugget pieces that are the same color, so you don’t wind up with cushions that are that nondescript grayish brown color.

Sadly, sometimes The Nugget isn’t always available. For those times when waiting on a waitlist just won’t do, you’ll need to find some Nugget couch alternatives ASAP. Luckily, there are plenty to choose from, like the modular Joey couch from Roo & You ($242), which comes in 14 different colors.

The Nugget couch is great for letting your child’s imagination soar — and for giving them a place to sit, too.

More Like This
Crate & Kids’s New Back-To-School Essentials Are Just Too Cute
16 Instagram Captions For Pictures Of Your Kids Making A Mess
23 Children's Books For Your Dino-Loving Kid
12 Genius Floats With Canopies (& Cupholders), So You Never Have To Leave The Pool