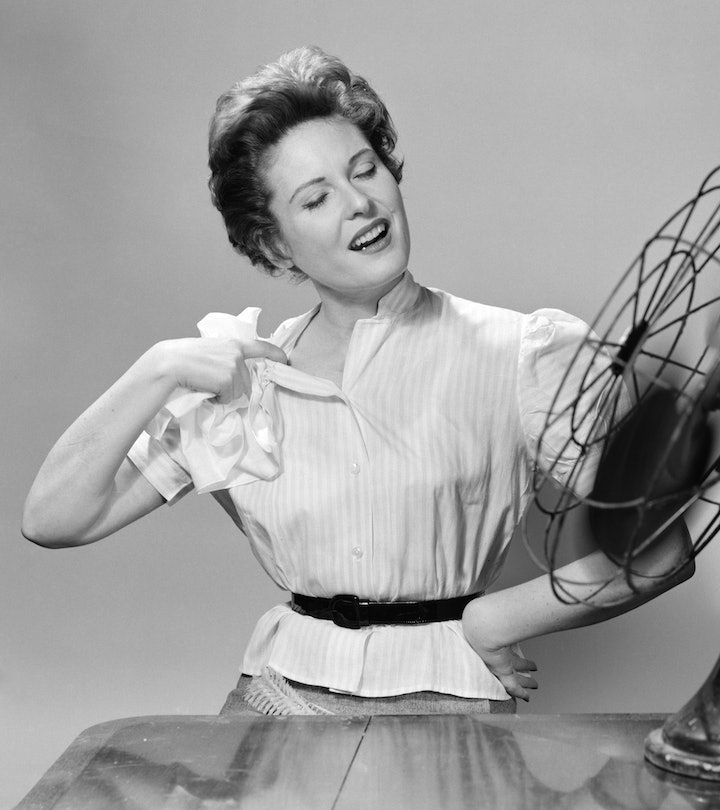 10 Things All Parents Say When It's Too Damn Hot Outside

Can’t we all just have an afternoon nap?

It’s the perfect storm, isn’t it? The kids are all home from school for summer vacation. They’re ready to be constantly entertained but not with anything you’ve planned. They’re always hungry and never hungry for whatever it is you’re offering. And then the heat settles in like a fog around you all. Especially this year when record-breaking heat waves are affecting millions of people around the country. This is when parents stop. When we simply cannot. When we all become one hive mind of saying the same things over and over again. Like...

“I’m not doing laundry, it will heat up the house.”

If anyone thinks they’re getting clean clothes when it’s too hot outside, think again. The effort it takes to turn on the washer is not worth it. And the dryer? Come on now don’t be ridiculous. Besides everyone is just going to sweat their way through their clothes anyhow. Embrace The Long, Hot Summer because none of us are doing laundry right now.

“What’s playing at the movies?”

Even parents who don’t like the movies are all about going to the movies right now and you know why? Air conditioning. Darkness. Snacks. Kids zipping their lips for two hour intervals. Air conditioning. Yes it deserves two mentions. I’m not saying that Minions: The Rise of Gru might be doing well at the box office because of the heat, I’m just saying it doesn’t hurt. Ask the #Gentleminions.

“Just leave him in his diaper.”

Do you remember all of those cute summer outfits and onesies you bought your baby? That was a nice little moment of wishful thinking, wasn’t it? That baby is staying in a diaper for the foreseeable future, and even just the diaper is enough to make him irritable. But no one wants a baby peeing all over the floor so what can you do?

“Who wants to order pizza?”

Or cook burgers on the barbecue. Or eat big bowls of cereal for dinner. Whoever came up with recipes for summer berry pies or thought they would be baking cookies this summer was fooling themselves. Parents are all saying it’s too hot to cook and honestly, the brain fog of all that heat exhaustion isn’t helping either.

Do you think our neighbor could run seven times around the block without stopping? Why does the mall smell like perfume? How many chicken nuggets do you think I could eat before I threw up? Can you cook chicken nuggets for me now? If you had a sister what would you name her? Would she be your best friend?

Nothing makes me want to cry in a corner more than an inquisitive 4-year-old in the dead heat of summer. Especially since the heat seems to make them ask more questions. No scientific proof, but ask any parent and I bet they back me up.

Maybe this one is just me, but when the heat hits none of us can handle sleeping in our hot bedrooms. Instead it’s pillows in the living room with fans all around us.

Add this to “stop fighting” and “stop breathing” because those are both things that make it hotter and for some reason seem to make all parents equally angry in a heat wave.

“Take a cold shower before bed.”

Plenty of kids graduate from a tepid bath in the evening complete with their toys and fun soaps to a straight-up cold shower right before bed. They’re good for you so your parents aren’t wrong.

“It’s too hot to play outside.”

The classic refrain for normal summer temperatures is to get outside and enjoy the beautiful weather! Chase butterflies, ride your bikes, go to the park! When it’s too hot, that all changes. Stay inside. Play video games. Watch a movie. Just sit and stare off into space. The thing about kids going outside is parents have to go with them. And we’re all saying a big no thank you to that right now.

It rarely works, but ultimately the only thing to do on a hot summer day is for everyone to have a nap in a dark cool room. This is a form of family self-care that kids simply do not understand. But it won’t stop us from trying every day.

At least until the heat wave lets up and we can think for ourselves again.