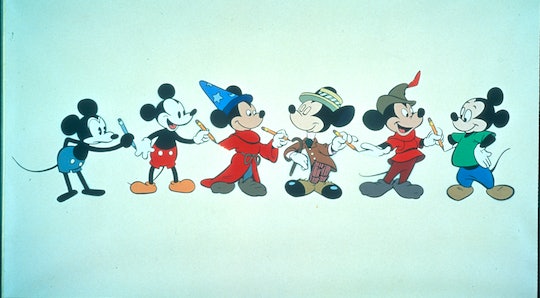 Mickey Mouse's Birthday Should Basically Be A National Holiday

Who knew Mickey was a Scorpio?

Mickey Mouse has spent nearly a century making kids laugh with his distinctive voice and silly shenanigans. He's been an icon practically forever, but when is Mickey Mouse's birthday? Disney’s mousey mascot turns 93 this year, and here’s how his special day was chosen.

On Nov. 18, 1928, Walt Disney’s Steamboat Willie debuted, introducing Mickey to the world for the first time, and the date has been considered his birthday ever since. After his debut, it didn’t take long for his appeal to catch on with the masses. He starred in animated shorts that were played in theaters across the nation, appeared in a newspaper comic strip, had licensed merchandise, and was a character float in the Macy’s Thanksgiving Day Parade (formerly the Macy’s Santa Claus Parade), all before his 10th birthday.

Then, in 1955, Disneyland opened and the magic only grew from there. It's worth noting that Minnie Mouse shares Mickey's Nov. 18 birthday, as she also made her debut in Steamboat Willie (talk about true love).

Part of Mickey’s success can be attributed to the passion behind his creation. Walt Disney, of Disney Studios, originally worked as a part of Universal Studios in the 1920s, where he and a team of animators developed a wildly popular children’s character, Oswald the Lucky Rabbit, according to Inverse. Once he realized the potential of children’s characters, Walt wanted to create more, so pitched the idea to the head of Universal Studios and asked his distributor, Charles Mintz, "for a slight increase in pay."

But Mintz, who had originally encouraged Oswald's creation, refused to give Disney a raise and "informed him that not only would he not be receiving more money, but that he and his backer, Universal Pictures, had persuaded much of Disney’s staff to abandon his studio in favor of Universal efforts. To make matters worse, Mintz told Disney that per their original contract, Oswald didn’t belong to Disney, but to Universal." Being the pro he is, Walt finished up his contract with Universal before leaving to start a new Disney Studio, which is where Mickey Mouse was born.

Unlike basically any other pop culture character that was created nearly 100 years ago, Mickey is still beloved and instantly recognized by, well, just about everyone. For his 50th birthday, Mickey was given a star on the Hollywood Walk of Fame (the first-ever cartoon character to get one). Even now, despite all of the cartoons that have come and gone, the mouse is still considered an A-list celebrity.

Over the years, Mickey has continued to be the cornerstone of the Disney Corporation. His character is prominently featured at the beginning of many Disney movies, his iconic mouse ears are still a must-have accessory for park visitors, and he’s one of the most sought-after characters to have a meet-and-greet with at Disney Parks around the world. And he looks darn good for 93.

As Disney grows and their animated movies just get fancier, Mickey Mouse will always be a reminder of the passion and ingenuity that started it all back in the 1920s. Mickey has done so much to help make the world a little happier over the last nine decades, so he’s more than earned a big birthday bash. Celebrate the day with some Mickey-shaped ice cream bars, put on your mouse-ears, and turn on one of your favorite Disney shows or movies (and no, it does not have to be Mickey Mouse Clubhouse, no matter what your toddler says).

This article was originally published on November 11, 2019