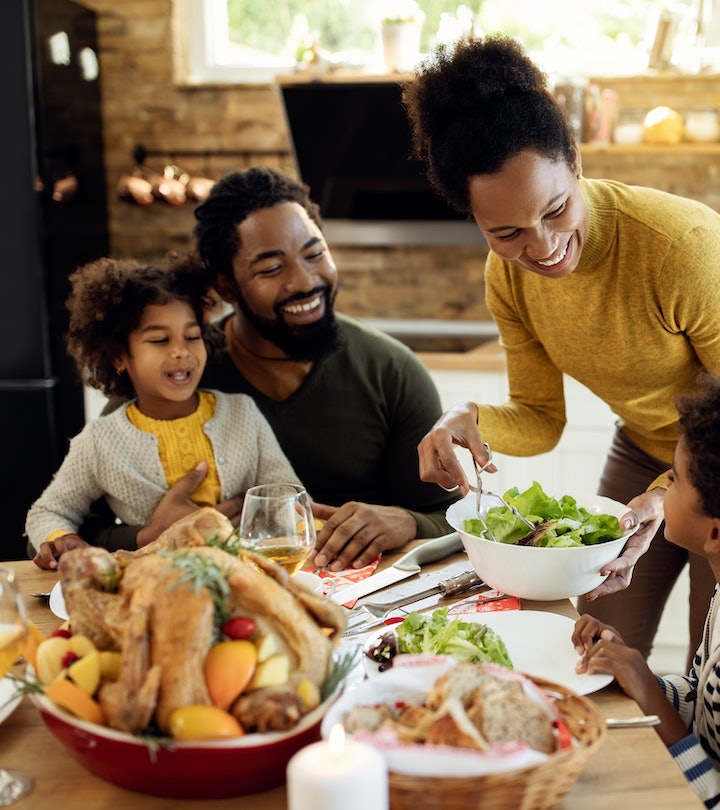 Here's The Official Date For Thanksgiving 2021

Because you want to make sure that your bird is oven-ready.

All it takes is for retailers to start rolling out their pumpkin spice products to make you realize that Thanksgiving is coming up quickly. But because Turkey Day doesn’t have a designated date, it can be easy to forget when to cram those cranberries into your already-overloaded shopping cart. So if you’re asking yourself: When is Thanksgiving 2021? Here’s what you need to know so you can make some plans that probably involve pie.

Thanksgiving is always the fourth Thursday in November. Why is this? Well, there’s a bit of congressional chaos surrounding the date. Originally, OG President George Washington created a proclamation that named Thursday, November 26, 1789 as the “Day of Publick Thanksgivin”, according to the National Archives. No one stuck to the designated date, though, and for a while, future presidents issued Thanksgiving Proclamations of their own, which made people perplexed as they tried to figure out when Turkey Day was.

The History Of Thanksgiving

If your understanding of what Thanksgiving is comes directly from A Charlie Brown Thanksgiving, Charles M. Schulz wasn’t too far off. After the Pilgrims landed in Plymouth, MA, they forged a friendship with Native Americans, one of whom was Squanto, who taught the colonists how to live off the land by cultivating corn, river fishing, and deciphering which plants were poisonous, per History.com. After their first successful corn harvest, Governor William Bradford helped organize what would later become known as the First Thanksgiving, according to Study.com. But what was actually on the menu? Probably not pie, since the Pilgrims didn’t have stoves at that time. What they did feast on was a lot of fowl, including ducks, geese, swans, and yes, turkey, too. Roasted deer as well as fresh veggies such as onions, carrots, beans were most likely served, as well as corn, but probably in the form of a sweetened porridge.

How To Celebrate Thanksgiving

Who’s to say that you have to start dining at dinnertime? Since the turkey is going to take a few hours to cook, why not break out dessert — for breakfast? Whether it’s classics like pumpkin or pecan pie, or a killer cobbler, slice up something delicious and fun to kick off the festivities.

Set Aside Time For Gratitude

Thanksgiving is all about being thankful, after all, so find out what everyone is grateful for. You can either take turns at the table talking about what you’re most appreciative of this year. And if someone is feeling too shy to speak, (or you’re all too busy eating), you can create a gratitude jar where people can write down their thoughts that can be read aloud later on in the meal.

Connect Virtually With Family And Friends

There’s nothing like crowding around the table, talking and laughing while your kids and their cousins argue over who has to eat the stuffing that was inside the bird. But what about family that is too far away to visit? Make sure to set time aside to connect virtually, whether it’s with older relatives who can’t commute or active-duty members of the military who can’t be home for the holidays.

Sure, you might still be digesting that big meal, but that doesn’t mean that you can’t start thinking ahead to the holidays. After dinner, host a cute little gift exchange that will get everyone excited for Christmas, Chanukah, or Kwanzaa. It might be an ornament, a handmade keepsake from the kiddos to their grandparents, or even a toy. Wrap it in festive paper, and soon, you’ll all be dreaming of a white Christmas — or those Black Friday deals that start as soon as the meal is over.

Thanksgiving is a time for family and friends, food and drink. So mark your calendars for November 25, when you’ll have a date — with a drumstick.