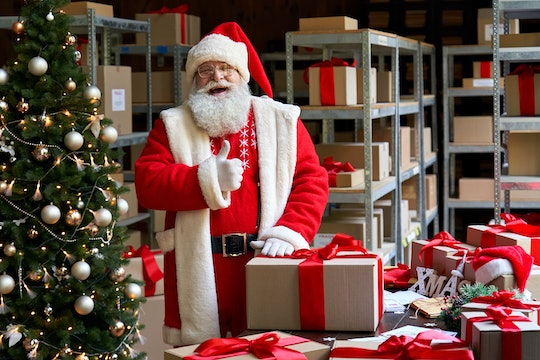 It's actually not an abbreviation of any words, it turns out.

He may know if you’re sleeping or if you’re awake, or if you’ve been bad or good (so be good for goodness sake). And he might be able to squeeze himself down chimneys of all the good little boys and girls as he delivers presents around the world in one night. But when it comes to talking, Santa certainly isn’t the biggest conversationalist out there. There is one catchphrase that the jolly fellow likes to utter, and that’s “Ho ho ho.” But why in the name of St. Nick does Santa say “Ho ho ho,” anyway? As it turns out, he actually isn’t saying anything at all.

Sure, he might chat kids up who sit on his lap at your local mall, but beyond that, Santa Claus doesn’t have in depth discussions with anyone. (Well, maybe Mrs. Claus and some of his top-performing elves.) But when Santa utters his famous “Ho ho ho,” it turns out that he’s not speaking, or trying to say a shortened version of “Happy holiday” (or saying something nasty about someone’s momma).

When Santa says “Ho ho ho,” he’s... laughing. And it makes sense, since Santa Claus is known for his big ol’ belly. Because that’s what you’re hearing, the sound that Mr. C. makes when he’s having a belly laugh, according to Santa Claus and Christmas. But instead of saying “Ha ha ha,” “Bwah!” or “LOL,” Santa Claus is unique, and his laugh sounds magical.

And if you think about it, more often than not, Santa’s holding his belly with those white gloved hands as it bounces up and down while he says “Ho ho ho,” laughing. He also likes to throw his head back, too, while holding his stomach and chuckling. And that’s when you’ll hear him say, “Ho ho ho.”

There you have it. When Santa Claus says, “Ho ho ho,” it’s really an expression of deep joy and happiness. The sound you hear is simply Santa laughing, because really, he’s a holly jolly fellow.