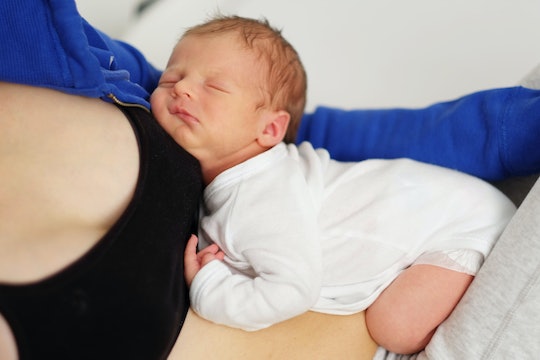 10 Breastfeeding Moments That Prove You're An OG Mom

One of the many things that makes a mama feel like she's earned her stripes, is when she has mastered the fine art of breastfeeding. Those first few nursing days usually make you feel like you'll never be able to do anything but sit on the couch and attempt to achieve that perfect latch. However, over time and when you get the hang of it, you discover that you really can do all kinds of things when nursing. After breastfeeding two kids for nearly 18 months each, I experienced a lot of breastfeeding moments that proved I'm an OG mom (at least in the nursing department).

I started out nursing the way I start out a lot of things I don't know much about: with an academic approach. I read a lot of articles and I took classes and I consulted with professionals (like lactation consultants). However, despite my best efforts I still struggled with my real life newborn and couldn't find the right positions he seemed to favor. In other words, I learned the hard way that my baby was not the type to keep to any sort of schedule at all (which sucked, no pun intended).

One of the upsides of having a baby that is basically attached to your boob every hour of every day, is the forced necessity of getting on with your life while simultaneously nursing another human being. So, while my academic approach basically had to get tossed in the garbage, I learned a lot of skills I hadn't expected or prepared to learn. I learned that I could do some pretty cool things while nursing – from the practical (like laundry and eating) to the ridiculous (like nursing in moving vehicles). In other words, I learned to breastfeed like a boss, and if you're capable of doing the following, it's safe to say that you're an OG mom, too.