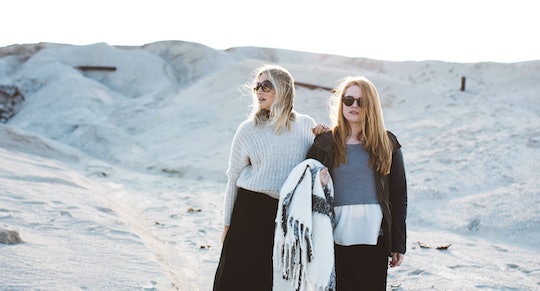 When my daughter was born, I was simultaneously thrilled and scared to death. Women are, in many ways, more accomplished, powerful, and supported at this point in history than they've ever been before, so it's admittedly not the scariest time to give birth to a tiny girl human, but there are still so many dangers we face, and so many inequalities to tackle. And if you're a feminist mom, there are things you need to talk to your daughter about, as part of the ongoing course of achieving the goal of setting her down a path of strength, empowerment, and knowledge.

I was mostly scared of raising a girl because I still remember too clearly so many of the awful things about growing up as a girl. I remember being a teenager who was afraid to rock the boat when a boy slid his hand up my leg. I remember feeling like I had to "play dumb" in order to get the cute boy to like me. And I remember thinking that the boys who called me "Hooters" in the hallway were just doing it because they liked me, even though none of them ever asked me out, or treated me with even the most basic amount of respect that a person would reasonably be expected to show someone they liked.

It took me a long time to feel as though I mattered enough to deserve more respect from the boys and men in my life, and I want my daughter to feel like she deserves that respect from an early age. I want her to understand — like I did now when I was young — that everything about her is important and valuable, and that respecting herself is the first step toward being respected by others. And because I want all of that (and so much more), I know that I have to bolster my daughter in these areas, it starts with having lots of purposeful talks with her while she's young. This is something all feminist moms know, and do. Here are 10 common, important conversations feminist moms have with their daughters at some point: