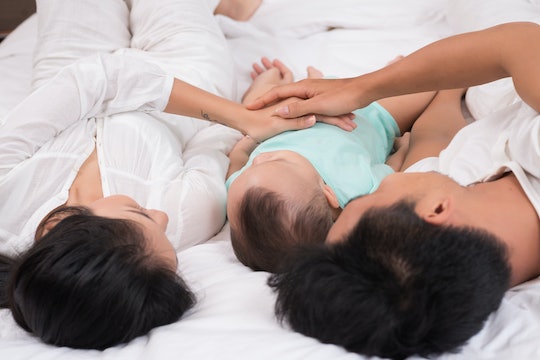 10 Gross Things That Happen When You Co-Sleep

I never envisioned myself co-sleeping with my son, let alone enjoying it. In fact, I had (unfortunately) heard so many myths and unnecessary warnings about co-sleeping, that I was afraid of sharing a bed with my child. However, after my son was born and struggled to regulate his body temperature, my team of doctor's and nurses suggested co-sleeping. My son's first night alive was spent by my side and that, as they say, was the beginning of the end. While I love co-sleeping, there are some gross things that happen when you co-sleep that can make the entire experience, um, not the best time. Is it worth it? Sure. Is it also pretty damn disgusting, at times. Oh, yeah.

Overall, I can confidently say that I've enjoyed a very positive co-sleeping experience. From the moment I used my body to help my son regulate his body's temperature, to the moment we bought our son a toddler bed and he transitioned to his very own sleeping spot, I've been able to get more sleep than most parents, breastfeed my kid at night with relative ease (and minimal effort) and enjoy the peace of mind that comes with being so close to my son that I know, without a doubt, that he's breathing. I can also confidently say that co-sleeping hasn't always been pleasant. While I was able to get more sleep, most nights, there were nights when I didn't sleep at all. When one person wakes up, everyone wakes up, so if a tiny toddler fist or foot or entire body decides to throw itself in multiple directions, well, them's the breaks. If I would like a little extra room to oh, I dunno, actually stretch out and not feel like I'm confined to a cage, oh well. It was beneficial and bonding and the best thing for my new family, to be sure, but sometimes co-sleeping sucked like nothing else has possibly sucked before.

Perhaps it's the gross part of co-sleeping that I, still, haven't necessarily come to terms with. I mean, my idea of "normal" has definitely change since becoming a mother, and what I put up with now compared to what I ever thought I would put up with in the past, is night-and-day different. Still, some things are simply disgusting, no matter the circumstance. For as much as I enjoyed co-sleeping, I can't say I miss the following absolutely gross things that came along with it: