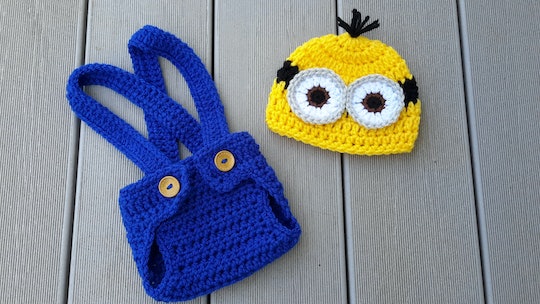 While some people might believe that Halloween costumes for babies in the NICU would be the last thing on these babies' parents' minds, participating in the holiday can actually be a bit of a healing experience — or at least an experience that can create some sense of normalcy during those long, difficult days and nights.

These NICU babies are spending their very first Halloween in the hospital, so why not let them (and the parents) get in on the fun a little bit? New York Presbyterian Hospital celebrates Halloween in their NICU by having their nurses and child life team dress the babies up so it's something fun for the parents and a way to help normalize the experience of being in the NICU by celebrating the milestone of a baby’s first Halloween, according to the hospital's publicist.

I'd imagine the costumes would need to be pretty minimal so they don't interfere with any of the medical equipment the babies need, and they'd have to be incredibly teeny tiny (which means they're even more adorable than you can imagine). Etsy definitely has some options for parents hoping to dress up their babies for Halloween, with many items either specifically for micro-preemies or customizable with the sizing. Plus, a pumpkin hat can go a long way, right?