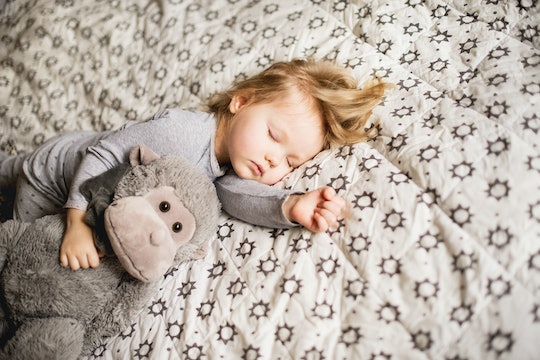 How I Get My Kids To Sleep In Their Own Beds

Sleep training your toddler (or grown child) is not the easiest thing in the world. Actually, it's pretty damn hard. Depending on your kid's personality, he or she might lead the rebellion against the premise before you even start a trial run. This happened to me with our 5 year old, which is why the real life hacks I use to get my kids to sleep in their own damn bed became a thing. Desperation comes in many forms and, for me, it was and is a continual state of bargaining, lying, and manipulating both of my children to get them to enjoy their dream state. Am I proud of myself? Hell yes I am. The end result is them in their beds and me in mine so, you know, mission accomplished. Isn't that what matters?

When my brother and I were younger, we lived in a low-income apartment complex with our divorced, working mother for awhile. This part of town wasn't great back then, and it's declined quite a bit since. What I remember most about that place was the fear. We feared living there but we feared it even more after dark. It wasn't uncommon to smell bin fires through the windows or to hear screaming and the occasional gunshot or firework past midnight. Because of this, my brother and I slept on an old mattress that laid perpendicular beneath the space of my mom's bed, in her bedroom. I'm not sure how long we slept this way, but there came a point where we were forced to our own rooms in our own beds, and I wasn't ready. I didn't sleep much and would often cry to go back to that old mattress in my mother's room.

The point I'm trying to make is, I remember being a scared little girl who didn't want to sleep far from her mother mom, so I feel for my kids when they protest because of whatever reason (the dark, monsters, the usual). The difference is, they're growing up in a totally different environment so, logically, if I'm taking every precaution to make them feel at ease in their own rooms, it makes no sense to me when they refuse. Plus, if you've never co-slept with a toddler kicking your face all night, it's literally the worst sleep for all involved. Regardless, I think their independence away from me (and me from them) for the night is a good thing. Here are some of the real life hacks I've come across to get my kids into their own damn beds. Sleep for all and all for sleep!