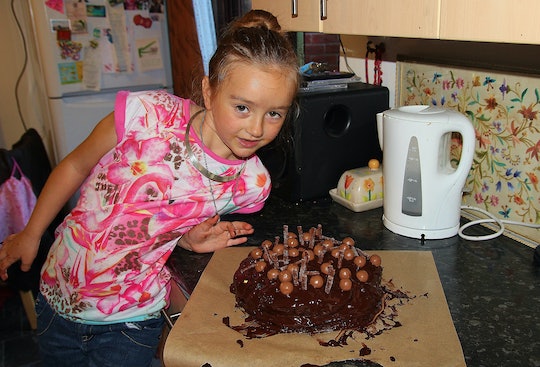 10 Struggles Of Being Really Into Baking When You Have Kids

Ever since my daughter was born, I've had these daydreams of the two of us baking scrumptious treats together, testing out new recipes and laughing together over chocolate chip cookies. I quickly discovered what baking with kids is really like, after my first (and second) attempt at doing so with my daughter. In case you haven't tried it out for yourself yet, I'll save you the trouble: It's an epic disaster of messes, improper ingredient measurements and later, your kid's boredom and eventual abandonment that would test the patiences of the saintliest saint.

All of which, you know, is awesome for some parents. Not so much for me. I love my kids, but I'm also a perfectionist. To me, that is what baking is kind of all about. Baking is specifically measured science. Doing anything with kids, on the other hand...not so much about perfection. Cooking and I have been on the outs for a while now, but baking was my first love, and it's tragic to have to wait until after bedtime to attempt anything elaborate.

Oh, and anything elaborate is most likely going to be just for my partner and I to eat. My daughter will try whatever it is that we've made together, filled with excitement, and then never want to touch it again. It's enough to drive a gal who loves to bake to the brink of insanity. Here are 10 other struggles those of us who love baking have: