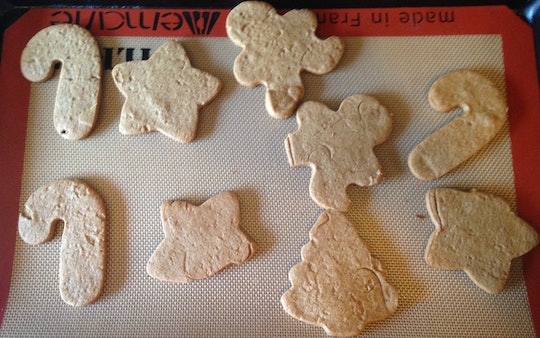 I Let My Toddlers Decorate The Christmas Cookies, & These Were The Results

As a self-confessed Pinterest mom, baking Christmas cookies is my time to shine. I love the tradition of spending an entire weekend in the kitchen, using special cookie cutters that only come out once a year and decorating intricate designs in frosting on yummy treats for those I care about. When I became a mom, I was excited by the idea of having kids to bake pretty and delicious treats for, but I never thought they would want to join me in making my edible creations until they were older. Yet whenever I go into the kitchen to prepare food, my twin 2-year-old sons stand at the gated entryway and beg to come in and help me.

From watching them play with their own plastic kitchen set, I know they understand the basics of pouring and stirring, but I've seen their crayon renderings and it's clear they lack the artistic skills and fine motor control to help me create the beautifully frosted cookies. So when my husband suggested I let them help me bake for Christmas year, I was skeptical. Would I hate having my tradition imposed upon? Were my toddlers up to the task of making, preparing and decorating cookies?

In the spirit of the holidays and being generous, I decided to turn over control of the annual gingerbread cookie-baking and decorating to my 2 year olds. I promised myself that I wouldn't step in to help them unless they asked for help it, and wouldn't try to "fix" their work. We gave it just one day, several rounds of dough, and all the toppings we could hope for, and here's what happened.

I measured out each individual ingredient and let the boys take turns adding them to the mixing bowl. I expected lots of fighting and a giant mess when we were done, but they really impressed me with their ability to share and made an obvious effort not to make a mess. Watching them concentrate and work so well together in making the cookie dough made me realize they're old enough to take on a bigger role in other areas, like cleaning up after their own toys and learning to take turns when they want to play with the same thing.

The only downside to letting toddlers mix up the cookie dough is the germs. Even though we washed our hands before we began, the boys are teething and talking animatedly. I know for a fact that specks of drool got into the dough. I love them and all, but gross. I vowed these cookies would not be the ones I shared with neighbors and family but instead would be the boys' very own batch. It made me wonder how many germs get spread inadvertently when people share homemade baked goods.

BRB, going to wash my hands and Lysol everything, just in case.

My boys might lack skills in the coloring department, but they're huge fans of Play-Doh, so I assumed stamping out the gingerbread cookies would be smooth sailing. But cookie dough is much thicker than Play-Doh, so they needed some help rolling and pushing the stamps all the way through.

Their favorite part by far was the fact that I didn't try to stop them from sneaking a taste like I do when we play with the craft dough. They thought they were getting away with something, and it was nice to let my guard down a bit and not worry as much as I typically do. Although I know there are plenty of recipes out there, I've never gone through the effort of making edible Play-Doh, but after seeing how much they enjoyed nibbling while they played I might just give it a try, not only for their enjoyment, but so I can be less stressed and more in the moment of playing with them.

I neglected to think about how my kids wouldn't know to place the stamps close together to get the most use out of the dough, and they were big fans of cutting though existing shapes. The final result was far from perfect, but they were so proud of their work that I (mostly) didn't mind.

I really should have known better than to hand a toddler an entire container of tiny white nonpareils, but I was excited to see how they would decorate and I stupidly thought he would listen when I said, "1-2-3, Stop!" Instead, he scattered more than half of the entire container all over the table and floor, to the delighted squeals of his brother. As I stood there with my mouth open, not sure where to begin the process of cleaning up, his brother snatched up the blue sugar crystals and tried to make it rain.

We took a break so I could vacuum and come up with a plan to outsmart my children. I grabbed two ice cube trays and filled the compartments with various cookie toppings so that even if the boys dumped them out, the mess would be minimized.

If I were icing the cookies myself, I would've several colors of frosting, but by this point, getting the project completed was more important to me than making the Christmas tree cookies green and the candy cane-shaped cookies red and white, so I iced the all the cookies with plain vanilla frosting and handed them off to the boys for adornment. I thought they would decorate one cookie at a time, like an assembly line, but I forgot I was willingly handing over cookies to small children. Obviously the first thing they did with every single cookie I gave them was lick and/or bite it to assert ownership.

As for the sprinkles and candies, one of my children tried to dip his cookies into them, like a glass of milk, and the other treated his toppings like a buffet and munched the candy in between bites of gingerbread. By this point, I gave up any hope for presentable treats and poured us all a cup of milk.

Once the initial sugar rush was over, the boys started to get more interested in decorating the cookies over eating them. Lolo in particular surprised me with his ability to concentrate and wouldn't let me clear away the decorating supplies until every bit of his cookie was covered in topping.

Is It Worth The Mess And Stress?

While letting my kids take over my Christmas cookie tradition was messy, it was totally worth it. Sure, nothing they created would garner any likes on Instagram, and three days later I'm still finding random sprinkles on the floor, but they loved it.

Letting them take part in such a grown-up activity showed me how independent and responsible they are becoming and that they are no longer babies, but rather small people with their own ideas and agendas. Sure, I won't be eating anything they make, especially during cold and flu season, but seeing them happy and establishing a new family holiday tradition was well worth losing my crown as the family's duchess of cookie decor.