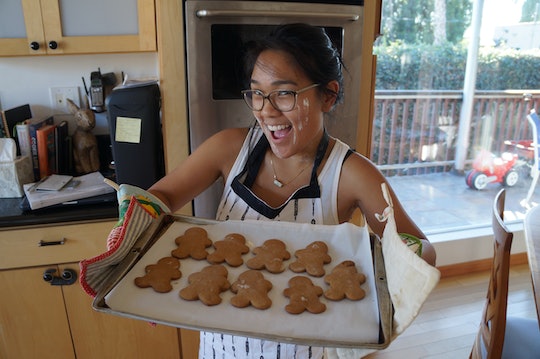 I Baked 4 Of The Most Complicated Christmas Cookies, & Here's What Happened

The holiday season, for me, comes with a series of cherished traditions. I whip out my advent calendar, hunt for the perfect tree, and most importantly, break out the bulk flour and bake hundreds of holiday-inspired cookies to send and gift my loved ones. I truly believe nothing says "Merry Christmas!" more than some homemade cookies. When I bake for the holidays, I keep things simple and work of my standby recipes. This year, however, I was game to go big or go home. I set my sights on baking some of the most complicated cookies Christmas has to offer, all in the hope I'd live to tell the tale.

Baking sugary goods is just about one of my favorite holiday activities, next to consuming them, of course. Plus, I consider myself to be a pretty decent baker. One of my fondest memories as a child was helping my mom bake almond biscotti on rainy, wintery days. Cracking eggs against large glass bowls, hovering over a stand mixer to peek at the fluffing butter and sugar, and rolling out the dough over floured countertops gives me the warm fuzzies.

Needless to say, I feel like I am well-versed in the science of baking and know my way around the oven well enough to whip up some Pinterest-worthy desserts that will be sure to impress relatives during Thanksgiving and Christmas dinners. So for this holiday season, I decided to step up my cookie game and tackle four different holiday treats to satisfy my sweet tooth and impress some family members along the way. I shamelessly like to get pats on the back for my baking game, so here’s what happened when I tried my hand at these staple sweets.

Spoiler alert: something always turns out, ummm … different than you anticipate.

More Like This
10 Dreamy Summer Popsicles To Indulge In Stat
A New 'Golden Girls' Themed Restaurant Is Happening!
Don’t Like The New Instagram? Well There Might Be (Some) Hope
What Age Do Kids Start School? Here’s What You Need To Know