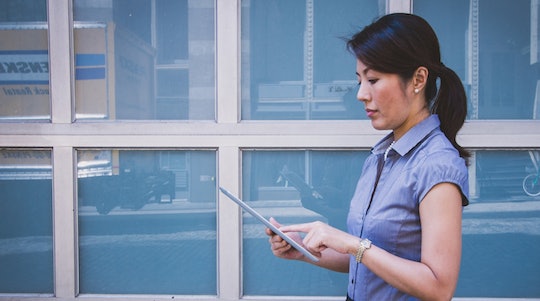 As a woman, I’ve been the target for a ton of unsolicited advice that my husband never receives. From what I should wear (shout out to the middle school administration for forbidding shorts), to what expression I should have on my face (ahem, guys on the street demanding me to smile), to how to raise my kids (I mean...everyone I've ever spoken to since first becoming pregnant?), the unsolicited advice has always flowed openly around me and my life choices. And because I’m a working mom, people have things to say about my career. Because of course they do. And almost always, they are things that they would never say to my male counterparts.

In general, moms hear more offensive stuff than dads, so why should the workplace be any different? I’m glad we’ve evolved to a point where we at least recognize gender inequality at work, based on gender, but I still feel that there is a stigma against me as a working parent that my employed husband just doesn’t have. I mean, why do I have to be the one doing all the work to try to lean in? Can’t guys offer to lean out and make some room?

But things are starting to look up. In early April, my home state, New York, reached a budget agreement that included non-gendered paid leave provisions, making it only the fourth state to mandate that employees continue to receive some income while they tend to the needs of a family member, like a newborn. So hopefully, as we toddle towards progress for working parents, people will stop saying things like the following to moms (which they rarely say to dads), about their careers:

More Like This
Sex And Mom Guilt: When I Date Someone New, Am I Cheating On My Kids?
9 Reasons Why Some Women Can't Breastfeed
Mindy Kaling Has The Chillest Response To Rumors That B.J. Novak Is Her Kids' Father
When Can Babies Hold Their Head Up? Experts Explain