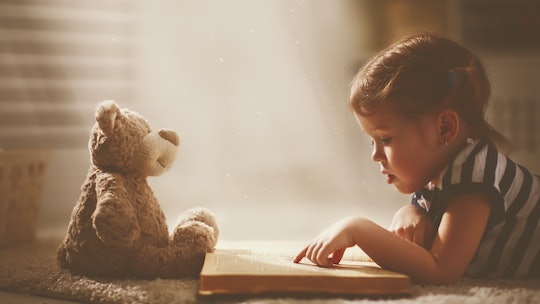 10 Things People Say To Smart Kids That Are Actually Shaming

My daughter is one of those kids many would label a "nerd." Of course, this doesn't surprise me in the least; both me and her father considered "nerds," too. We consider this a blessing though, as she actually likes learning. I mean, it's not every day you find a kid (or an adult) who considers learning to be "fun." I honestly think that's why smart kids, or kids who love to learn are, sadly, are treated a little differently. There are some things people say to smart kids that are actually shaming, as our society has arbitrarily decided that being smart falls second to being athletic or looking a particular way or, well, you get the idea.

My daughter is one of those kids who has to constantly be busy. She'll usually sit and play with one toy for about five, maybe ten minutes, and then want to switch to a new toy and I can't help but think her need to constantly be busy and engaging and learning is a trait she has picked up by watching me go to school and be a mom and tend to a household. She's all about her books and interactive toys that teach colors and letters and numbers and shapes and she's picking it all up at rapid speed because, for her, learning is playing. She's passing milestones early and while it's impossible for me to not be immensely proud, it also makes me acutely aware that not everyone thinks my daughter's affection for learning is "healthy" or "normal."

While it's sometimes difficult to differentiate people's intentions (i.e. if what they're saying is meant to be a joke or to be taken seriously), things certain family members and friends say to my daughter, or me, actually shames how smart she is. Usually, I'm at a loss when these comments are made in my daughter's direction. If a child is curious and has a strong desire to learn and grown intellectually, why in the world would we shame or tease or do anything other than facilitate that desire? So, with that in mind, here are 11 things people say to smart kids that are actually shaming, because learning that being "smart," is somehow a bad or "funny" thing, can easily be unlearned, too.