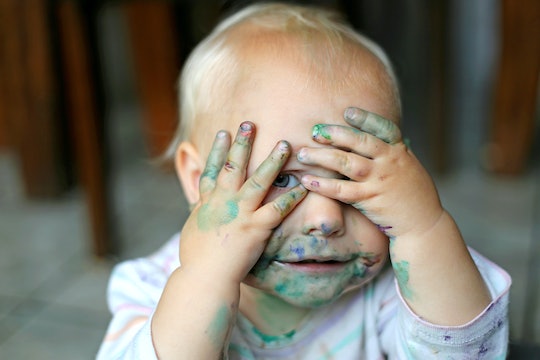 Ah, babies. They're just so sweet and so innocent and they look like perfect little angels. They're all soft and cuddly and so snuggly and warm. I mean, they even smell good. However, there's no denying the times babies are gross hell monsters because, well, they are. They totally are. For every moment they're undeniably adorable, is about ten moment they're pretty freakin' gross. It's just science.

When my now 4-year-old son was a baby, a new and rather disgusting thing happened pretty much every day. I was in no way prepared for any of it. However, the worst moment occurred when he ate a fully engorged tick that had fallen off our cat. He saw it there on the floor, thought it looked like something he needed to eat, and popped that sucker (get it? HA!) right into his tiny baby mouth. He crawled over to me with something brown dribbling down his chin. I assumed he'd found a raisin or piece of chocolate chip cookie until I fished the remains out of his mouth.

I wretch a little now just thinking about it. I had to look very closely to figure out it was not, in fact, a raisin. Raisins (last I checked) didn't have legs, let alone eight of them. Eight tiny legs and a tiny little head on a chewed up, flattened body. I blew up my pediatrician's phone. I blew up the internet. I blew up Facebook. I was lucky I didn't blow up my bathroom by vomiting all over the place. So, because I would never wish that kind of panic-stricken-disgust on anyone, here's 10 times you can expect your precious angel to completely and totally gross you out.