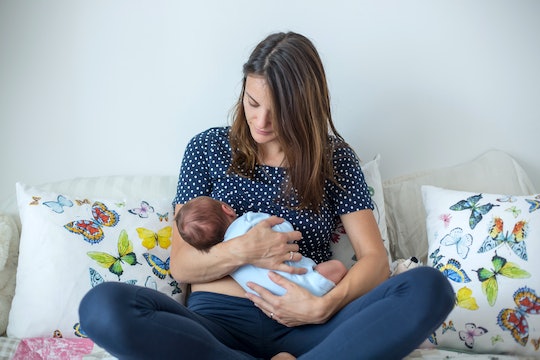 I recently had a discussion with some friends of mine about how they would describe the hell on earth that is mastitis. For the uninitiated, mastitis is inflammation of the mammary gland in the breast and usually comes about (in one way or another) through breastfeeding. I realized that I missed an opportunity to ask moms about tricks they used to get through mastitis — a mistake I seek to rectify right about... now!

My own tip sounds stupid, and is also a little embarrassing but, in the name of the lactating sisterhood, here it goes: I nursed on all fours. Yes, I'm talking hands and knees, dangling my poor infected boobs over my baby's face, like a cow or some other quadrupedal mammal. Dignified? No. Did it make me feel like a saggy-teated Roman statue of the Lupercal suckling Romulus and Remus? Yes. But you know what? Dignity and the desire to not be an animal sort of goes out the window when you're in the throes of mastitis. Antibiotics also help, and feel less primal, but sometimes you've gotta do what you've gotta do while the doctor calls it in to the pharmacy, you know?

So those are some things that worked for me. (And, really, they did: I only had to deal with the worst of it for a day or so.) But what did other mamas find worked for them? Here's what they had to say when it came to getting through the garbage fire that is mastitis: