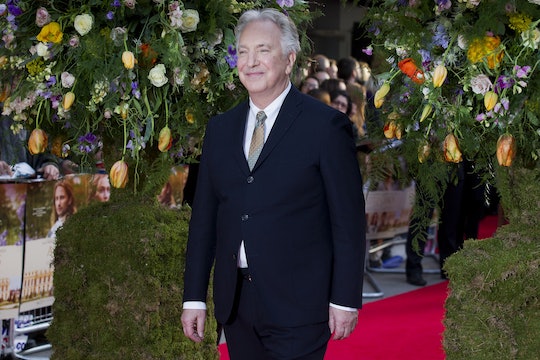 Alan Rickman died Thursday morning and fans of the enormously talented actor mourned the loss deeply. Rickman was an incredible entertainer, portraying some favorites from Hans Gruber in Die Hard to Professor Severus Snape in the Harry Potter series. His career in film started in 1988, but Rickman started his acting career on stage back in 1985, becoming immensely popular in the London theatre circuit. Quotes from Rickman are inspirational and show that he loved doing art for what art could accomplish in the world — not because he was after the fame.

No matter when or how someone becames a fan of Alan Rickman, the news of his death is hard to swallow. When someone plays such enormously popular characters, and for such a long time, fans are bound to feel like they know the man. He was a hero to those in the entertainment industry, and was deeply loved by his family and friends. No one is feeling the grief of this loss like those who loved him best, but all of his fans are in mourning as well. To keep fans in good spirits, here are 11 Alan Rickman quotes to memorize. Write them on post-its, put them in a journal, write them on Facebook — any way fans can think to memorialize Rickman and spread his joy, wisdom, and love a little further.

"The more we're governed by idiots and have no control over our destinies, the more we need to tell stories to each other about who we are, why we are, where we come from, and what might be possible. Or, what's impossible? What's a fantasy?"

"I've never been able to plan my life. I just lurch from indecision to indecision."

"I do take my work seriously and the way to do that is not to take yourself too seriously."

"It is an ancient need to be told stories. But the story needs a great storyteller. Thanks for all of it, Jo."

"I want to swim in both directions at once. Desire success, court failure."

"Do you know that moment when you paint a landscape as a child and, when you’re maybe under seven or something, the sky is just a blue stripe across the top of the paper? And then there’s that somewhat disappointing moment when the teacher tells you that the sky actually comes down in amongst all the branches. And it’s like life changes at that moment and becomes much more complicated and a little bit more boring, as it’s rather tedious to fill in the branches."

"I think there's some connection between absolute discipline and absolute freedom."

"It would be wonderful to think that the future is unknown and sort of surprising."

"I'm still living the life where you get home and open the fridge and there's half a pot of yogurt and half a can of flat Coca-Cola."

"If people want to know who I am, it is all in the work."

"Talent is an accident of genes, and a responsibility."

Rest in peace, Alan Rickman. And, thank you.