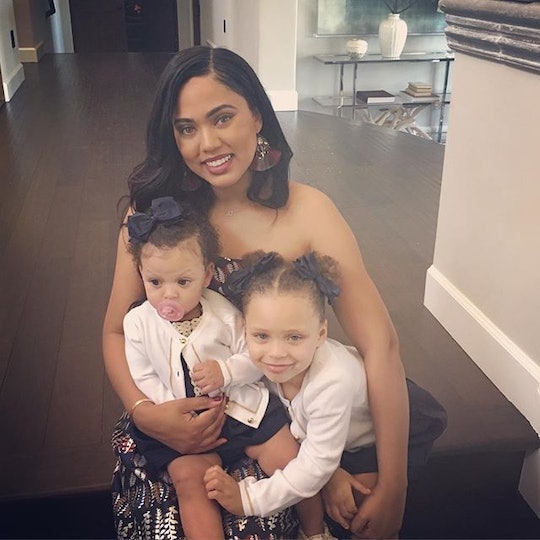 As if the world's celebrities didn't already surpass beauty standards and bars, now society has to contend with the spawn of the beautiful people. Celebrity babies who look exactly like their moms are destined to take over the world, am I right? Luckily, in today's world, celebrities are becoming so much more "real" and grounded to everyone that you can almost forget that their kids will know a life like no other. I mean, when Chrissy Teigen tweeted about coming home from the birth of her daughter with her own pair of diapers on, it made you love her even more, right?

But their babies are still totally out-of-this-world gorgeous. (Obviously not cuter than my own kid, but whatever.) It's funny, because I have a hard time seeing my friends and family in their own children. Hell, when people tell me my daughter looks like me, I just don't get it. To me, she just looks like Alice. I see some of our similar features, but I would be hard-pressed to say that she looks exactly like me.

But when it comes to famous people, I can catch every single resemblance. Like these 11 celebrity babies that look exactly like their gorgeous, talented mamas.

Cooking star Ayesha Curry is also wife to second-time NBA MVP Stephen Curry, and mom to two beautiful little girls, Riley and Ryan. Here mini-me, however, is her youngest daughter Ryan. They definitely have the same eyes and chin, but they also have a sweet glow about them that makes you want to stay all day in their company.

Chris Pratt and Anna Faris might be my favorite celebrity parents because they are so very real about the struggles of parenthood, but there's no way Anna could deny little Jack if she tried. I mean, come on! How cute are those twins? No doubt he's inherited her wicked sense of humor and talent, too.

It's the button nose that links River Rose and her mama Kelly Clarkson for me. They both look so delightfully happy that you can't help but notice they're also twinning it up. If sweet River has a voice to match her mom's, too, the world of music needs to hold on tight.

I can not with Haylie Duff's daughter, you guys. I just can not. That smile and scrunched up nose from baby Ryan makes her a spitting image of her mom.

Tamera Mowry-Housley may be twin sisters with Tia Mowry, but Tamera's little girl Ariah is giving them a run for their money. First of all, do you not just want to eat her up? With those chin and cheeks from her mommy, she looks like an absolutely scrumptious doll.

Hilary Duff stole my pre-teen heart as Lizzie McGuire, and now her little boy Luca is stealing it all over again. Hilary's features have just morphed into a smaller form on her little guy, but they also both have very expressive faces that make them look so similar.

I mean, I'm just going to put it out there if Alyssa Milano does the face swap filter with her son Milo, you'd have no idea that there was any filter at all. Look at that bone structure! He is a gorgeous little guy and he can thank his mama for those genes.

Obviously Jessica Simpson was going to make beautiful children, but my goodness. Her little girl Maxwell is perfection. Not only does she look exactly like her mom, but she also has that same fun, twinkle in her eyes that Jessica does and she looks like the total life of the party.

Jessie James has two children with Eric Decker. But her little guy, Eric Decker II, looks so much like her that I had to include him on the list. I think it's the shape of his eyes and his sweet little lips, but he's also got his mom's head tilt down to an art.

OK, little Luna does look an awful lot like her dad John Legend, but she's also a spitting image of her mom Chrissy Teigen. Let's just hope she has some of Chrissy's firey personality inside of her, too.