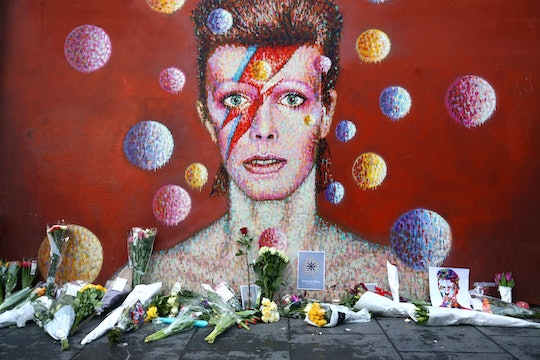 News broke early Monday morning that rock icon David Bowie passed away at 69, leaving a gaping hole in the hearts of music lovers around the world. With his larger-than-life sense of style and mind-bending lyrics, Bowie was one of those artists who seemed functionally immortal. His works have served as a cornerstone of popular culture for so long that it is almost impossible to overstate his influence. But his power goes beyond lyrics about angst and political unrest. Read any interview with the late star, and you'll find that David Bowie quotes are just as profound (and, in true Bowie fashion, as puzzling) as any of his songs.

Bowie's words, be they sung in a concert hall or spoken in a quiet setting, have shaped the lives of millions. Celebrities were influenced by Bowie's words, and ordinary people felt extraordinary because of the rocker's incite. I mean, can you imagine how dull the rock n’ roll landscape and world would have been without “Space Oddity” or “Fame"? It’s impossible to picture glam rock without Bowie. And could anyone else in the entire world have played the Goblin King in Labyrinth? (Answer: no.) The world is richer thanks to Bowie’s influences.

Though he may be gone, Bowie will live on through his work and his words of wisdom. Whether it's to get you through today's tragic loss or to get you through any of the obstacles life throws your way, here is a roundup of some of Bowie's most striking quotes and lyrics.