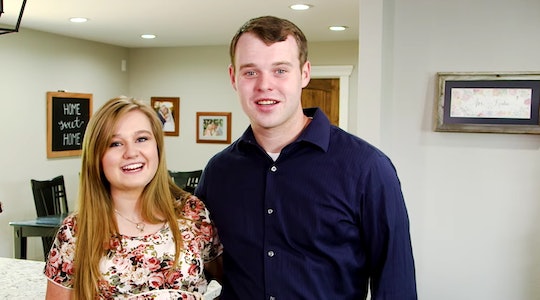 When Joseph Duggar married Kendra Caldwell last year, she was relatively unknown to fans of the Duggar family's reality shows, TLC's 19 Kids & Counting and Counting On. But, with each and every Counting On episode that Kendra stars in, it's easy to see that she fits right in with the family. But because some people might still be unfamiliar with her, these facts about Kendra Duggar will definitely inform you a bit more about one of Counting On's new moms.

It's pretty obvious that there are a lot of members in the Duggar family, so it's almost impossible to keep track of them (and memorize all of their J names). And as each of the 19 siblings get older and begin marrying, it's even harder to get to know them. Because of this, remembering a few random facts about each of their spouses is a great tool to get to know them a bit better — like Kendra, for example.

There are a few things that fans do know about Kendra. After watching the many specials surrounding Joseph and Kendra, fans are aware that the couple married in September 2017, according to In Touch Weekly, and announced that they were expecting three months later, according to People. And in June, Kendra gave birth to her first child at the age of 19, according to E! News.

But there is so much more to know about Kendra than just her relationship. Just take a look at these fun facts about her.

Everyone has a favorite color, but you would never guess Kendra's favorite color because it can't be found in your average rainbow.

In a special video posted to TLC's YouTube channel, Kendra revealed that her favorite color is the color of Joseph's eyes. So, what color is that? Close up photos of Joseph show that he has blue green eyes.

2. She Had A Surprising Obsession When She Was Younger

3. You Won't Catch Her Eating This

In the YouTube video on TLC's channel, Kendra revealed that her favorite type of food is Mexican food and she isn't much of a picky eater.

But she is a picky eater when it comes to vegetables. "Mushrooms — those are bad," Kendra said. "They're too slimy."

4. What She Does For A Living

During a recent episode of Counting On, Kendra told one well wisher on her honeymoon that she was planning on "helping Joe with his business" — he sells cars for a living — after their honeymoon ended, according to In Touch Weekly, in addition to stay home and starting a family.

Given that Joe and Kendra have started their family a few months shy of their first wedding anniversary, it seems as if their timeline worked out perfectly.

5. She Shared A Special Life Event With Her Mom

During her two-part birthing special, which aired on TLC, Kendra revealed that she and her mom had been pregnant at the same exact time, sharing this super special life event together. However, Kendra was just a bit farther along than her mom — she found out the exciting news about her mom when she was eight months pregnant.

6. Her Wedding Didn't Go As She Imagined

During a Q&A session on YouTube, Kendra revealed one very interesting detail about herself — she never thought that she would have a big wedding.

But, when you marry into the Duggar family, a big wedding is pretty much a guarantee.

In a "get to know the couple" video, posted on TLC's YouTube channel, Kendra told her sister-in-law, Jana Duggar, that she loves staying up late, especially with Joseph.

"We do more talking late," Kendra said in the video. "All of our good talks happen late at night."

8. ...But She Still Loves Her Mornings

In that same YouTube video, Kendra revealed that she is a huge fan of coffee and often needs it to get her going in the mornings (probably because of her late nights).

And although she loves her nights, Kendra said that breakfast is her favorite meal of the day — and prefers it over dinner.

9. She Isn't A Fan Of Social Media

This might be the reason why Kendra prefers calling over texting. In a YouTube video posted to TLC's YouTube channel, Kendra said that she would much rather jump on the phone with someone first, before texting them.

10. She Is Super Close With This Duggar

During an episode of Counting On, fans were able to see that Kendra is very close with Joseph's sister, Joy-Anna. Joy-Anna gave a super tearful speech at Kendra and Joseph's wedding rehearsal dinner where she explained that she was the closest with Joseph and is just as close with Kendra.

"Kendra, over the last five years you have become one of my best friends," Joy-Anna said during the episode. "I really knew that we had a kindred spirit and you were a true friend and that you loved me for who I was."

It makes sense that they would be close — Joseph proposed to Kendra at Joy-Anna's wedding, according to People, and the two girls even got to experience their first pregnancies together.

11. There Will Probably Be More Kids In Her Future

When given the choice between a small family or a big family, Kendra told Jana in a YouTube video that she would much rather have a big family.

This makes sense since Kendra comes from a big family — she is one of seven siblings, according to In Touch Weekly, and her mom is currently pregnant.

If this isn't enough, then people can tune in to Counting On on TLC each week to learn more about Kendra and her husband.

But now that they're more familiar with Kendra and her quirks, watching Counting On might be just a bit more fun.