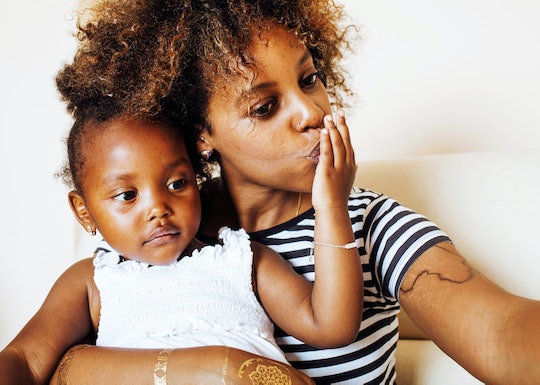 11 Things People Say To SAHMs That Are Judgmental

When you tell people you're a stay-at-home mom (SAHM), well, you might as well tell someone you're obsessed with Scott Baio. You'll see an awkward and insincere smile on their faces as they say something like, "Oh how nice!" or "Good for you!" in a way that tells you that they don't think it is nice at all. And sometimes, there are things people say to stay-at-home moms that sound really judgmental.

I had never intended to be a stay-at-home mom, but kind of fell into it and ended up not minding the way it felt once I'd landed. The company I'd been working for folded the week before I became pregnant. I vomited all day every day for the first seven months of my pregnancy, so by the time I felt ready to start interviewing again, it was a little too late to get hired. I hated being home with my colicky newborn, I was depressed, but I also felt too weak and defeated to be of use to any workforce at the time. Once the fog of new motherhood lifted, however, my baby and I had a nice routine going. Plus, I started to write again, taking on a few freelance jobs that I could do from home. I also sold my first children's book to a major publishing house. It was a crazy, but also prolific time for me. I hired a babysitter a couple of hours a week to help out so I could write and also get some time for myself, which was amazing.

Now, I have a pretty steady freelance gig that I can do from home (though I choose to do it close to home, but not in my apartment) and my kids are mostly in school, so being a SAHM has more balance than it did when my kids were younger. Still, I get really judgmental questions and comments from people who do not know me very well, or from relatives who haven't been brought up to date on my life, and it is infuriating.