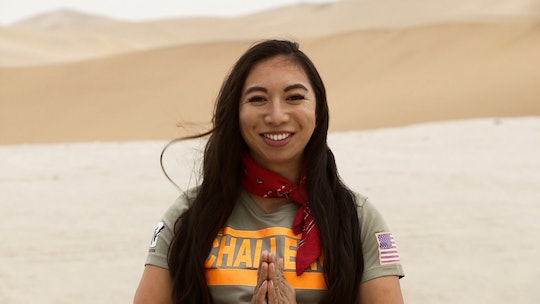 It can be hard for a rookie to stand out on The Challenge without looking like they are trying too hard or even making a fool of themselves. Ninja Natalie arrived on The Challenge: War of the Worlds ready to prove herself, but it didn't take long for other players to take her seriously and the twitter reactions to Ninja Natalie on The Challenge prove how much fan support she already has. Unlike some of the other rookies this season who came from reality dating shows or different installments of Big Brother, Ninja Natalie’s claim to fame is competing on multiple seasons of American Ninja Warrior, which afforded her that handy nickname that suits her so well.

Ninja Natalie was already a model and professional rock climber before she started competing on American Ninja Warrior and when she came on The Challenge this season, she brought some of that competitive nature. It’s what helped her get this far and keep her in the running for the coveted $750,000 prize. Some fans might think she is a little too big for her britches right now since she is technically a rookie like so many of the other Challenge contestants. But I like to think it’s just her confidence shining through to help her continue to excel in the game. And other Challenge fans seem to agree.

Ninja Natalie started off as Paulie’s partner and although he already had a season of The Challenge under his belt, he definitely didn't carry their team by any means. Until the teams were disbanded, Ninja Natalie and Paulie were a formidable pair who cleaned up after several competitions. But even without Paulie by her side, Ninja Natalie has remained fierce competition.

To be fair, there are a lot of strong female competitors this season on both the veteran and rookie sides. But Ninja Natalie has already gained a following as a strong, smart, and capable competitor that a lot of fans are rooting for above most other contestants this season. She has proven time and again that she has what it takes to go far in this game alone, so the accolades are totally warranted.

Some fans love Ninja Natalie on her own, but others already got attached to her when she and Paulie dominated competitions together. It's not like she necessarily needed him to get by because she is doing just fine on her own, but being Paulie’s strong and capable partner this season showed fans how serious she is about the game.

Although it's still unclear who will be back for The Challenge next season or if Ninja Natalie will be asked to compete again, Challenge fans are already rooting for her return. It's not uncommon for strong players to come back the following season and even several seasons after that. The culture behind The Challenge relies heavily on returning players and some fans think Ninja Natalie has what it takes to go down as one of the strongest players in the series.

Ninja Natalie has made it pretty easy to root for her since she has proven herself to be a strong competitor worthy of making it to the finals later this season. She might not have won over all Challenge fans just yet, but it comes with the territory and she is still managing to kill it.

If I had to pick a few rookies from this season who will likely be back next season, Ninja Natalie would definitely be at the top of my list. For now, though, fans can continue to root for the American Ninja Warrior veteran on this season of The Challenge.