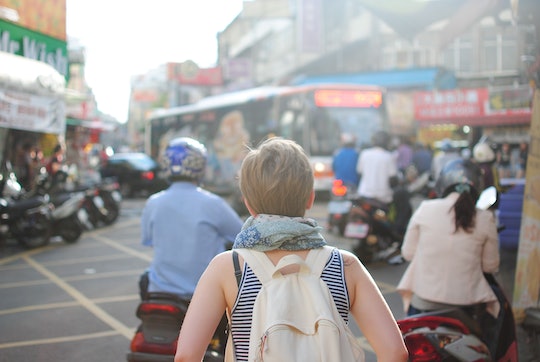 It seems like every other day, there is a new headline about how millennials are delaying, or changing, the standard trajectory of adulthood. We're putting off having kids or buying homes, choosing to travel or build careers instead of "settling down" and experiencing something as life-changing as pregnancy. What I didn't realize, until I became mom myself, is that while having a baby is a big life change that we all build up in our minds, there are so many weird life moments that are similar to having a baby. Like, shockingly similar. We all experience these monumental life shifts, whether it's procreating or traveling or dating that one person we really shouldn't have dated but did anyway because, well, poor life decisions are a thing.

I've, personally, followed a fairly traditional path that involved college, a brief stint living alone in a big city, moving in with a partner, marriage, dog, baby, and finally, a successful twitter interaction with Michael Bolton. Now, before you think I’m super basic, let me be the first to tell you that I also have a nine-year-old pet rabbit and I’ve never seen Game of Thrones, so, no, I’m not the exact same girl you went to high school with.

As it turns out, I found the whole “having a baby” thing to be, for me, the most significant as far as major life changes go. This probably does not come as a surprise to most people. However, it’s also not the only major life I've experience, and so many of the other big moments I've had mirrored that one time I birthed a human being, and probably even prepared me for motherhood. Let’s go on a brief magic carpet ride through life and consider some of these major milestones alongside the birth of a child, shall we?