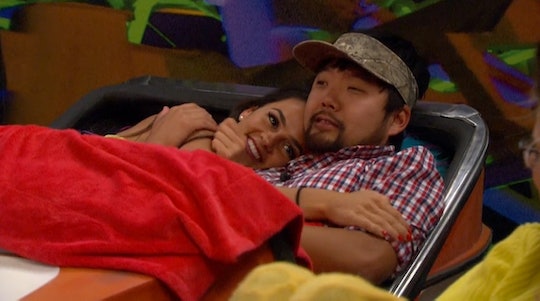 By now in the Big Brother house, the alliances are shifting, the teams are kind of crumbling, and the only thing good and pure in the house is the showmance going on between Natalie and James. And yes, it's still going on. With adorable and cutesy things in a couple comes plenty of naysayers, but James and Natalie from Big Brother are so into each other on the live feeds that they kind of daily squash any claims that they aren't a thing. Because, let's be real, "Jatalie" is totally a thing.

While getting three episodes of Big Brother every week seems like a lot, we all know that those 42-ish minute episodes fly by and then we're left with the live feeds, which fuel fans' James and Natalie obsession even more. The two haven't been given much screen time as a Big Brother couple on the edited shows, but they haven't been shy about their flirtatiousness, cuddling, and phone conversations in the house. Basically, with each passing day, James and Natalie are that much closer to earning the 'Best Showmance of the House' award. That's not really a thing, but it should totally be a thing. Julie Chen, do you hear me?

It's not really hard to get behind a couple based on fun and silliness that gets closer all the time, but these reasons why James and Natalie are the best thing the Big Brother house has going for it right now are too true.

1. They Pull Pranks Together

Even when Victor was still in the house and getting weirdly angry about James's pranks, he was still going at them, and Natalie wasn't far behind. Of course, no one can beat James, the ultimate Big Brother house prankster, but it's still cute. And a couple that pranks together, stays together, right?

2. They Are Olympic Cuddlers

Almost anytime you see Natalie and James together, they're spooning or otherwise cuddling. They've been known to do it on the couch, or a bed, or even the bumper car beds. Basically, if it can fit two people, they're all over it. And I kind of love it.

3. Their Conversations Are Actually Legit

Natalie and James aren't hanging out together, waiting for an opportunity to put their hands all over each other or waiting for time to be alone. Instead, they're actually talking about their interests and home lives.

4. They Won't Let The House Tear Them Apart

According to most of the other houseguests, James and Natalie need to be split apart, but after a little fight Monday night, the two were back at their cuddling game. Take that, Paulie.

5. They're Kind Of Opposite And It's Kind Of Adorable

Natalie lives in New Jersey and is a former NFL cheerleader. James is a Texan who hunts, wears hella camouflage, and has a little daughter back home. Their lives are pretty different outside of the house, but that's what makes their obvious connection so amazing inside the Big Brother house.

6. Natalie Has Already Made It Clear That He's Her Perfect Guy

It seems like forever ago that Natalie revealed to some of the other girls in the house that James is the perfect guy for her. And she said it with an excited smile and such honesty that you can't help but want to shove them together like a couple of Barbie dolls you're smacking together and forcing to love each other.

7. When Everyone Else Is Being Mean, They're Diplomatic

When basically the whole house was shunning Tiffany, Natalie took it upon herself to go and talk to her. Not to gain intel, like Nicole seemed to be doing, but to actually see if she was alright and was going to be OK. And as James said himself, it's not right to treat Tiffany so poorly and even called out Michelle for doing it.

8. They're Content To Just Hug It Out For Now

As of right now, we haven't seen more than a few hugs and maybe a forehead kiss between James and Natalie and it seems like that's OK with them for now. The two are taking their time, deciding what this is and what this isn't.

James seems to always be making Natalie laugh and that, in turn, makes him chuckle himself. Whether he's playfully teasing her, tickling her, or just joking with her, there's always something cutesy going on between the two.

While it would be plenty possible to use their bond for evil and try to play the other houseguests, that's not what Natalie and James are about on Big Brother. They're just a couple of people who seem to have an awesome connection and are keeping that separate from the game, which is kind of the best move.

11. Fans Are Already Obsessed With Them

The episodes of Big Brother 18 may not have been very Natalie/James heavy, but the live feeds, as always, tell a different story. And fans have noticed. The gifs, tweets, and video compilations just don't lie. James and Natalie are a thing and need to remain a thing.

12. They're Both Genuinely Cool People

Apart, James and Natalie are playing the game smoothly, calmly, and without too much force just yet. And together, they're the same way. They aren't malicious, but they aren't weak either. They're just genuinely nice people who found each other in a house full of craziness and bullies.

Basically, James and Natalie on Big Brother are giving me life right now. The house has been weirdly divided since day one, and is now full of a bunch of cracked alliances and weary truces that don't seem to concern them too much. Which is good, because my favorite Big Brother showmance does not need to be corrupted.