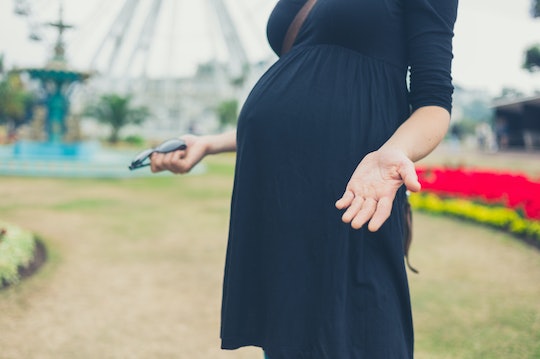 12 Responses To Being Asked If You're "Still" Pregnant

Surprisingly, people actually think it's acceptable to say a slew of intrusive things to pregnant women. And we're supposed to what? Grin and bear it? No thanks. If someone is rude or insensitive about my body, I reserve the right to respond with an appropriate level of sassiness and sarcasm. When you're nearing the end of your pregnancy, there's nothing more annoying than being asked if you've had that baby yet. So for my third trimester sisters, it's my pleasure to offer you the following responses to being asked if you're "still" pregnant.

I went a full 40 weeks with my daughter, so I know how creepy people can be to a woman nearing her due date and how infuriating that kind of commentary can be. I "sucked it up," though, because it was my first time and I didn't know any better. I'm currently seven months pregnant with a second baby, and I am not here for remarks about my changing body. I've already been told by a woman in my pole dance class that I'm "not going to make it." Because, you know, apparently I already look like Humpty Dumpty. I didn't say anything and, instead, I figured still being able to get my ass over my head was a pretty good clap back.

The whole "still" pregnant thing really baffles me. According to Science Daily, the length of human pregnancies has a natural variation of up to five weeks. In fact, anywhere between 37 and 42 weeks is considered "normal." So you can always throw the science at Captain Obvious and friends, but I think you'll find the following comebacks just a little more satisfying: