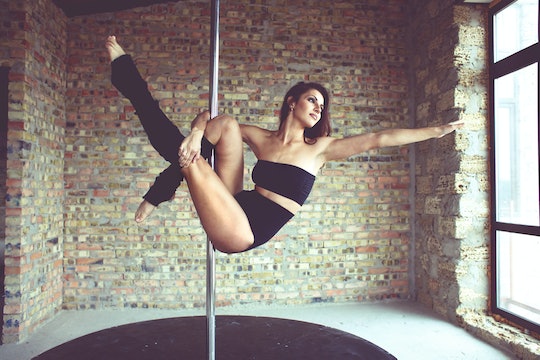 Let's play a little word association game. I say pole dancer and you say, stripper? That's my guess, and it's a problem because our society has presented a limited view of the aerial arts. (Not that there's anything wrong with exotic dancing — no stripper-shaming here). Pole dancing, however and thankfully, has recently become more mainstream. People (women and men) are checking it out as a fun way to exercise, express themselves artistically, and get in touch with their sensual side. As it turns out, pole dancing prepares you for motherhood, too, so the benefits truly are endless.

I was first introduced to pole dancing at a bachelorette party. When the celebratory group showed up to the studio a little early, I watched a bit of the advanced class taking place before ours. Now, I wasn't very interested in the sexy stuff (just not my speed), but I really wanted to learn those badass Cirque de Soleil tricks the advanced class members were pulling off. I took the intro class and, well, advanced through several levels. I bought my own pole to train at home (I even took it when I moved to Honduras) and started performing with my studio's troupe, eventually competing. I loved seeing my body get strong, my teacher and mentor who pushed me beyond what I thought I was capable of, and my pole community of badass women.

Once I got pregnant, I decided to quit pole dancing. Some women continue to pole while pregnant, but I was too sick and worried about potentially falling. Still, throughout my pregnancy and later as a new mom, I often found myself reflecting on the many ways pole dancing helped me prepare to be a mother, including the following: