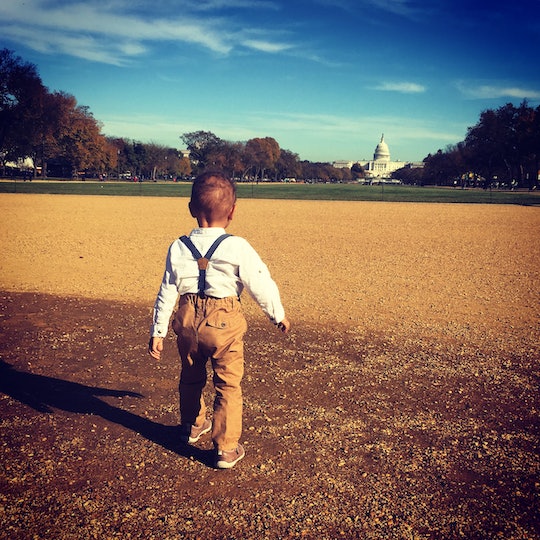 12 Signs Your Kid Will Be A Future POTUS

While out to eat soon after my toddler learned how to run, he got out of his chair and (I thought) was planning to take off. Instead, he started walking up to random folks in the restaurant, smiling at them and shaking hands. It was a move I'd seen many times before at political fundraisers (minus the high-chair escape, of course); the kind of charm-and-disarm routine candidates do when they first arrive to make everyone feel special enough to donate. There are few clearer signs your kid will run for president someday than watching them naturally do what many candidates have to be taught.

Like his big sister (also known as the reason I eventually memorized Grace for President for a few months several years ago) and like me and my husband, he already shows signs of being politically minded. In addition to working the room at parties and restaurants, he also likes to hop up to every podium he sees and tell crowds about his big plans for infrastructure investment (“Train!” “Bus!” “Digger!”).

Fortunately for all of us, also known as his future and emphatic constituents, he's an honest and very progressive little guy. A is for Activist is one of his favorite books, and he will proudly raise a solidarity fist if you tell him “Power to the People!” However, regardless of their politics, if your kiddos show signs like the following, you might be raising a budding presidential candidate, too. I guess I'll see you, and our little one, at the polls sometime soon, dear reader.