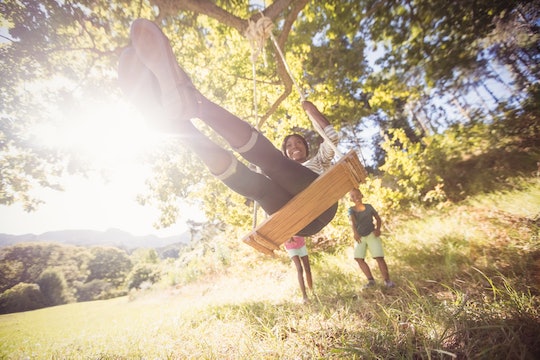 9 Signs You're Raising A Progressive Kid

If you identify as a progressive parent, chances are you’re trying to raise your child or children to go beyond traditional ideas of what it means to be polite and respectful, in order to become the kinds of people who can help society become a more just place. However, and unlike other things in our lives as parents, there’s no single set of milestones that help us know our kids are developing the way we want. If we pay attention though, we may see certain signs that we are raising progressive kids.

It’s kind of hard to capture, in a single word, what I mean by “progressive.” There are a few different terms, like “tolerant,” “open-minded,” “socially aware,” “socially just,” “woke,” that all approach the same idea I’m trying to convey, but either aren’t commonly used enough to be understood in conversation with most people, or don’t quite hit the mark. “Tolerant” is probably the most common and long-standing, but that word has always grated on me when used in this context. After all, people “tolerate” extreme temperatures or bad smells. So, the idea that someone would need to learn to “tolerate” my Blackness, or gender, or any other fundamental part of a fellow human being’s identity, offends me. What I’m really talking about here is people cultivating a genuine sense of respect and understanding of difference, not merely that they have the bare minimum level of self-control required to live around different people without being overtly hateful or violent.

Because raising the kinds of kids who respect and understand the wide range of differences that form people’s identities is an important goal for progressive parents, I’ll call our kids “progressive,” too, for symmetry’s sake. These are kids who, usually thanks to their parents’ efforts but sometimes because of other influential people in their lives, are growing up understanding the importance of respecting others’ boundaries and consent, appreciating diversity in all its forms, and recognizing how different parts of their identities give them advantages in some situations, and disadvantages in others. They usually can’t express that in those terms, though, but if you notice any of the following things in your child, they’re probably growing up socially just.