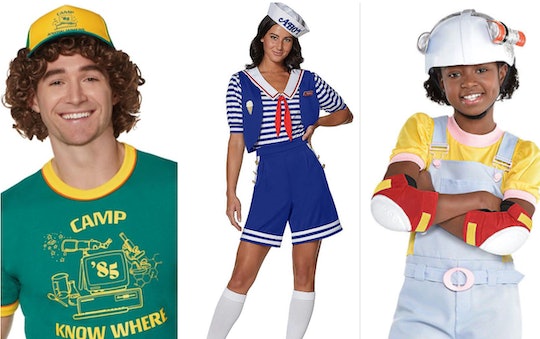 Turn Your Halloween Upside Down With These 12 'Stranger Things' Costumes

It's been a hot minute since Stranger Things season three dropped in July, but true fans are still riding the wave of nostalgia from the show in preparation for Halloween. While you can easily gather the items needed to dress like one of the show's iconic characters from your own closet or at a local thrift shop thanks to the throwback vibes the characters perfectly embody, many party supply stores and costumers have made it easy to purchase a complete costume from the show for Halloween. These 12 Stranger Things costumes are perfect for wearing to celebrate a holiday that's almost as creepy as the show itself.

Group costume ideas abound: Team up with family members or friends to dress as the Scoops Ahoy crew, or simply don the getups of the characters each of you most identifies with. If you get stuck arguing over who will get to dress up as Eleven (because, let's be real, she's the actual best character), you can always select different momentous looks from the show's three seasons and all be the same character, just sporting different looks. (So yeah, lots of Elevens.) Read on for all the Stranger Things Halloween costume inspiration you could ever need.