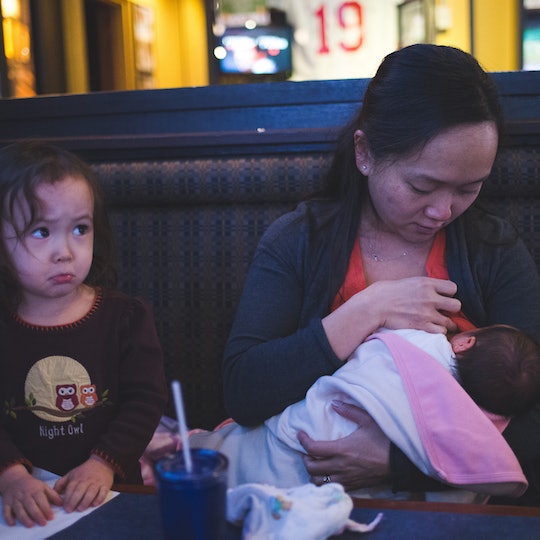 The debate and furor that continues to take place regarding breastfeeding babies in public astounds me. When a baby comes on the scene, breasts become the least sexy thing pretty much ever. They are milk makers; functional sources of food and of comfort. They are, at times, painful and uncomfortable, and for most women, the only reason they’re getting sucked on or bitten is because of a baby. Ask any breastfeeding mom whether she wants her breasts touched by anyone other than her baby, and you’ll likely get a middle finger wagged in your general direction. (Clearly, this is not true for everyone, and slow clap for any women who are down with recreational use of their boobs while breastfeeding.)

So why do people insist on continuing to look at this part of a woman’s body as sexual, even when there’s a baby attached to it? I mean, they would have to be viewing a woman's breast as inescapably sexual if they're outraged about its visible presence in public. No one gets upset about wrists and elbows as they go about performing the functions they're designed to do? If a boob is indecent, then it's for a reason.

This Victorian modesty is laughable in an age where nudity (especially female nudity) is the norm in pop culture. You can see women exposing more of their breasts on the covers of magazines in the grocery store than when they’re breastfeeding their infants at the local mall. Why is one acceptable and the other not? Why is it that, if you don’t agree with how those magazines objectify women, you are able to simply turn your head the other way, while you can’t do that when a woman feeds her child?

Newsflash: We nursing moms don’t care, either way. These are the things we care about.