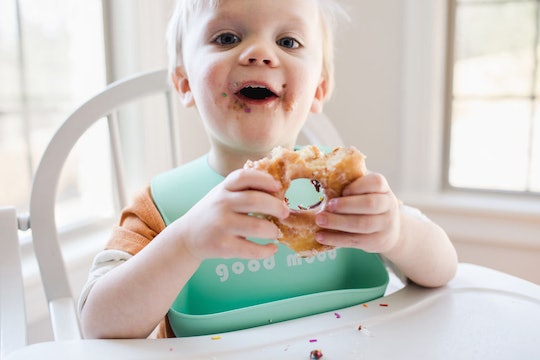 My husband and I came up with our son’s name in a rather unceremonious way, while eating ice cream on the couch. I initially wanted to name him “Cash,” like Johnny Cash, and my husband deadpanned, “That’s the most hipster thing I’ve ever heard.” He wasn’t wrong, so I gave in and we settled for the compromise of Jackson, (our favorite Johnny Cash song). Point is, there's no wrong place to look for baby name inspiration. Like, why not see how our neighbors to the north do it? Might as well take a look at the top Canadian baby names for some international inspo. Oh, Canada!

As Baby Center Canada reported, “The most recent baby girl name list shows that parents are enjoying the more modern names along with the vintage names.” Olivia, which was an extremely popular name for the past seven years in Canada, according to Global News, dropped down to number 17 in 2018, with Ava being in the number one girl name spot, up from number six last year. The website said that apparently, Canadian parents are starting to shake things up, with “more than a third of their top 100” from last year not appearing in the most recent list. Other names from past years are on the rise; Ivy, for example, actually moved up 73 places from its spot in the prior list, and it could be ”due to little Ivy Mulroney's turn in the spotlight, after she followed her best friend's mum Meghan Markle up the aisle as bridesmaid at the royal wedding in May."

As for the boy names, Liam is in the lead this year, with Jackson being the number two most popular boy name. (Of course we named our son Jackson last year to be “different,” but I guess that’s not working out. Especially if we move to Canada.) Names ending in “-son” were definitely a hit in the most recent Canadian baby names list, including Grayson, Mason, Carson, Harrison, and Hudson, among others. And for the shocker — to me at least — the name Zayn, as in One Direction Zayn Malik, moved up 33 spots to the number 16 name. Are there more crazed “Directioners” having babies than I thought?

With all that said, the list of names for both sexes seem to be a pretty good mix of old and new. So if you’re looking for a Canadian name for your child, you have quite an array of options to choose from.