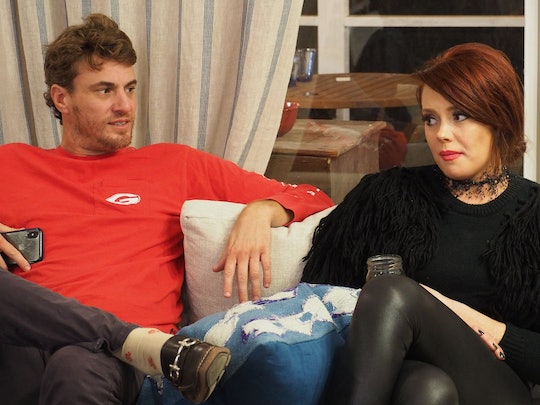 Twitter Supports Kathryn On 'Southern Charm' After That Big Confrontation

Sometimes on Southern Charm, Kathryn Dennis just can't win. The past couple of years have been a lot for her, from dealing with ex Thomas Ravenel and getting her life on track after struggling with substance abuse to finding her way as a mom. And now that she has devoted a little extra time to her current boyfriend, her friends are worried. But judging by the tweets about Kathryn on Southern Charm, her friends have nothing to worry about and should probably chill.

Kathryn has actually come a long way from the woman who skirted her friends’ calls at every turn and essentially shut herself off from the rest of her inner circle. Because of her history of doing just that and going on a downward spiral, her friends have concerns. And in a way, I get that. They don't want to see her go down a similar path she went down before and they just want to see her happy and healthy. According to Kathryn, she is healthy living her best life and right now, but they have worry blinders on.

On Southern Charm, Danni Baird and the others worried about Kathryn after they couldn't get ahold of her days before their planned trip. Kathryn resurfaced in the nick of time, but the damage had been done and the rumor mill between the women was already in full swing. To Kathryn’s credit, she explained that she had spent a busy past few days, but from her friends’ perspective, it isn't that difficult to send a quick text.

Still, Kathryn is an adult and, as fans on Twitter have pointed out, she doesn't necessarily need to "check in" with anyone.

Part of the issue Kathryn’s friends had with her in this week’s Southern Charm episode was that she seems to be spending most of her time with her new boyfriend rather than with her friends and neglecting them in the process. The other part was that, as they told her during their trip, they have seen this pattern from her before.

"I feel like your personality has been a little testy and the only thing I can equate it to is that you’re seeing this guy," Danni told her. "I know your pattern of behavior, and I know when you start to avoid, avoid, avoid." But, Kathryn explained, she was just trying to live her life. After the time she had on Southern Charm last year, you can't really blame her for embracing a new chapter.

Last season, Kathryn met and butted heads with Thomas’s new girlfriend, Ashley Jacobs. Ashley accused Kathryn of being a bad mother and things got progressively worse. Then, in 2018, Thomas was accused of sexual assault, which gave Kathryn yet another public issue to deal with. As far as fans are concerned, she has no one to answer to about her actions, especially since she doesn't appear to be doing anything wrong.

Earlier this season, Kathryn revealed that she’s dating Florida politician Joseph Abruzzo and told her friends that she has a lot in common with him. Unfortunately, they had concerns from the start. After Craig Conover read a report online about Abruzzo’s nasty divorce, he expressed concerns for Kathryn. And Naomi said there were already red flags that Kathryn ignored.

Some Southern Charm fans on Twitter pointed out that Kathryn doesn't even seem particularly close to her co-stars outside of the show and that it has to be exhausting to have to check in with them every so often while filming. Others tweeted that if the women have this many complaints about Kathryn, then they don't necessarily have to be friends with her. If you ask me, that’s not totally wrong.

The point is, Kathryn is an adult who can make her own decisions. Her friends have every right to have their own concerns, given Kathryn’s past personal problems and her past with men. But right now, she seems intent on figuring things out for herself. So instead of laying into her in an effort to rein her in, it might be a better tactic to show support to keep her close.