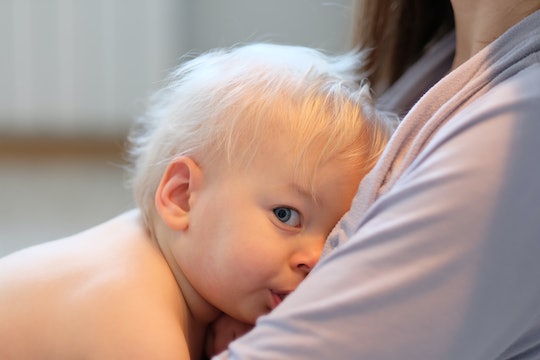 13 Breastfeeding Moms Graphically Describe The Hell That Is Mastitis

When I think of the most painful experiences of my life, it goes as follows and in no particular order: labor and delivery, acute neuralgia localized on my occipital nerve, these two times I really, really had to pee but I was on a boat (you'd think I'd have learned after the first time), and the time I got mastitis. It was once, it only lasted a day, but it was one of the worst days of my life. When I asked other moms to describe what mastitis feels like, I was comforted to learn that, no, I'm not a massive wuss and it's precisely as bad as I thought.

I'd heard about mastitis, but I went a long time without ever having experienced it. It wasn't until my youngest was about 10-months-old that I had the misfortune of catching the Boob Bug. A warm, tender spot on the side of my right breast began to grow hotter and radiate heat. Next thing I knew my whole body ached (especially the aforementioned boob) and I was splayed on the living room floor, unable to move, feeling sicker than I'd ever felt in my life. It was around this time my baby wanted to nurse and, seeing as I was still her main food source, I didn't see how I had much of a choice. So I figured, "OK, I feel like crap, but I've nursed while sick before. I can phone this in."

Friends, there would be no phoning this in. The moment my daughter latched I felt pain the likes of which I had never experienced in (at that point) 27 months of breastfeeding. It felt like her little baby jaws were a bear trap that was also triggering an internal bear trap and I was the poor defenseless bear, sitting there, roaring in agony.

Fortunately, I had read up on mastitis enough to know what it was. Even more fortunately, I had an awesome midwife that I could text, and she diagnosed me over the phone and prescribed me an antibiotic which began to work its magic within the day.

Still, mastitis is a curse from on high and may strength and courage bless any poor soul who has to endure its tortures. Here's what some of those dejected wretches had to say about it: