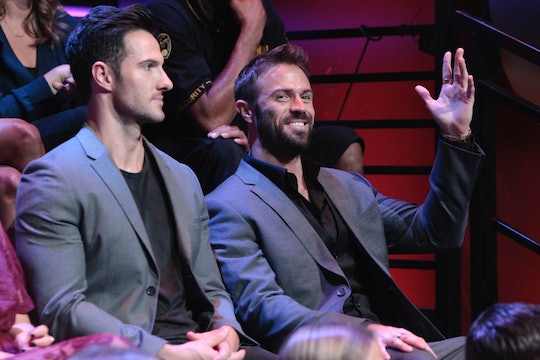 13 Reasons Chad Shouldn't Be The Next 'Bachelor', Because That Storm Has Passed

When Chad Johnson came back to TV on Bachelor in Paradise, he proved that there is no taming the Chad Bear. He even ended up being too much for Lace Morris, who was something of his female counterpart. So, should Chad for the next bachelor? Honestly, it's hard to tell if he would even want the spot on the next season of The Bachelor, because his not-giving-a-damn attitude just isn't cute anymore. And something tells me that if you get kicked off Bachelor in Paradise the first night, they won't ask you back to head your own show. And swearing at Chris Harrison? A definite no-no.

There are plenty of reasons why Chad shouldn't be the next Bachelor, and while it was once easy to find fans professing their love for him on Twitter, it's become a little more scarce as of late. ABC took another chance on him by offering him a precious spot on Bachelor in Paradise and look how that ended. Don't get me wrong — Chad makes for amazing TV and he always comes up with one-liners with the most shock value, but that doesn't make him Bachelor material. I don't know if it even makes him a decent guy in real world material.

So no, Chad shouldn't be the next bachelor, and these reasons are just some in the long laundry list to support there being no Chad Johnson on the next season of The Bachelor.

Chad is known for being unpredictable in both is actions and his words. Can you imagine if he led some of the women on as the next Bachelor and then dumped them simply because he'd forgotten about them or they were "coming off a little naggy"? It would be heartbreaking, but also not even surprising coming from Chad.

He Can't Hold His Alcohol

As he proved in the season premiere of Bachelor in Paradise, Chad Johnson cannot hold his alcohol. He obviously doesn't know his limits when it comes to drinking, and we now know that Chad and alcohol simply isn't a good mix. If there is alcohol involved in any of the pre-rose ceremony cocktail parties on The Bachelor, he might be able to control himself to an extent, but it's really anyone's guess.

He Wants Everything To Be The Chad Show

Obviously if Chad was the next Bachelor it would legit be his show, but The Bachelor is also about the relationships and the women involved. Chad is far too self-centered to be able to share some of the spotlight. He was barely able to do it with the men who were on the same level as him on The Bachelorette.

He Can't Keep His Mouth Shut

From The Bachelorette to the "After The Final Rose" episode, and on to Bachelor in Paradise, Chad Johnson has proven himself time and again to have absolutely no filter. And sure, honesty is nice when it comes to your future spouse, but Chad takes it to a whole other level of never knowing when to shut the Hell up.

He's Way Too Full Of Himself

The way Chad carries himself, he is obviously convinced that he's some kind of gift to women. And don't get me wrong, the man is totally gorgeous, but that personality of his definitely takes him down several pegs into the regular good-looking category. Can he push some of those tendencies deep down inside of him in order to be an admirable Bachelor? Yeah, probs not.

He Would Treat The Limo Entrances Like MTV'S Next

Remember that show Next on MTV, where a girl or guy would get out of the limo bus and the person looking for a date would either welcome them with open arms or scrunch up their nose and shout "Next"? Yeah, that's Chad as the Bachelor. We've already established that he has no filter, so think of how that will translate to his meeting with each vulnerable woman exiting the limo.

No One Likes A Man Who Brags About His Money

On the season premiere of Bachelor in Paradise, as Chad and Lace got crazy in the hot tub, you could hear them talking about all sorts of drunken nonsense. But you could also hear her call him out for being rich but also a jerk (or something like that). And he replied with, "Tell that to my Lamborghini". Really? In the words of Chad, is this a real scenario right now?

He's Offensive All The Time

When he was bad mouthing the guys on The Bachelorette, he talked about everything, from their appearances to their adoration of JoJo. Then, he showed up on Bachelor in Paradise and became the worst he's ever been when he offended Sarah Herron (and every single one of us) by referring to her missing limb in the most derogatory way.

He Plays It Up For The Camera Hard

Obviously Chad knows what gets him attention. When he started protein-loading during The Bachelorette, he realized how ridiculous he was being and eventually started eating huge slices of lettuce and a sweet potato on-screen. In fact, do we even really know the real Chad? How can we trust him to not steal the spotlight with new tasteless gimmicks if he were on The Bachelor?

He Relates To Spencer Pratt

On Twitter, Chad and Spencer Pratt of The Hills have been tweeting back and forth. After Chad tweeted, asking Pratt if he's watched Bachelor In Paradise, Pratt replied with, "I think Jordan and JoJo had u roofied" and "we are BFF." Barf.

You Have To Earn The Spot (And He Hasn't)

The last few Bachelors were sweet men who were also gentlemen and deserved their chance at love on The Bachelor. What has Chad done to earn that opportunity? Unless he does a complete 180, I find it hard to believe that he is deserving of any more chances, let alone one that entails his own show.

You Can't Take Him Seriously

Will the real Chad Johnson please stand up? Like I said, it's hard to figure out who the real Chad Johnson really is, amidst all of his antics and mistakes. He's always got a smirk or even scowl going, with some smart ass or downright mean comment coming out of his mouth. He has never once seemed genuine. He did apologize to Evan on Bachelor in Paradise, but it has gotten to the point where even something like that warrants suspicion.

He Doesn't Even Take Himself Seriously

Chad stares into the camera while slipping deli meat into his mouth. He acts like a total creep outside of the guys' house until they let him in. And all the while he knows what a creep he's being and doesn't even care. This is a grown man who can't seem to act normal, even for a minute, so obviously he prefers to play on what will get him screen time rather than be a real person.

As it stands right now, Chad Johnson should not be the next Bachelor. There are plenty of more deserving guys from last season on The Bachelorette (we're looking at you Luke, and you, Robby) who actually want to find love. Unless Hurricane Chad can do something to come down off his cloud of awfulness, it just isn't happening.