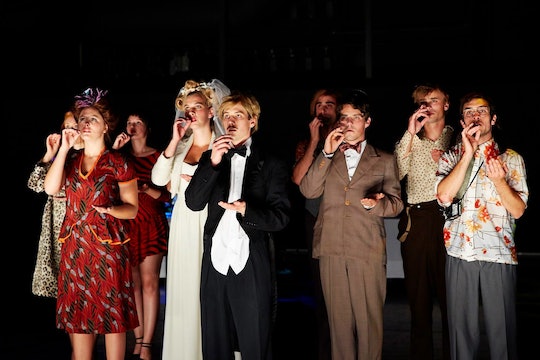 Am I the only one who wishes I could have known what my partner was like as a kid? I mean, I know bits and pieces thanks to stories from his parents and from his longtime friends, and from the grainy '90s photos that exist of him in ringer tees and cargo shorts. Still, I would have loved to have gone to camp with him, or to have seen him run track, or play in the band he was in with his friends, or act in the plays he did when he was in high school drama.

All that said, I know that, yes, these experiences came with him and that they’ve shaped him as an adult. I mean, he teaches Film Production now, so it’s not hard to see that something about that his drama experience agreed with him. And, as his partner, I’m not complaining about that. After 10 years together, I think some of that experience has played out awesomely in our home life, in both big and small ways. I could be a little biased since I'm his biggest fan (aside from our toddler son who has been known to approach level-10 meltdown status when dad leaves the room), but still, please allow me to explain how former drama kids make the greatest partners:

More Like This
140 Quotes About Love To Make You Swoon
Why Your Vagina May Be Itchy After Sex & What To Do About It
What Is Emotional Cheating? Experts Explain
Here's Why Your Vagina Burns After Sex
What Parents Are Talking About — Delivered Straight To Your Inbox