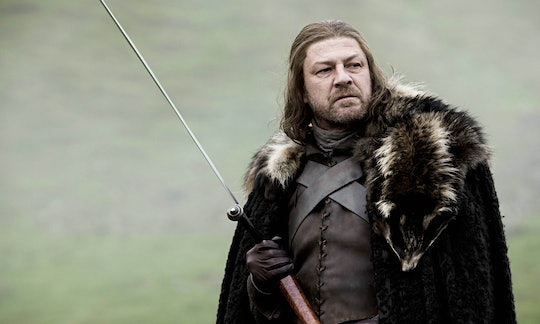 Before you draw your sword made of Valyrian steel and start arguing about how noble Ned Stark was, or how many worse parents there are in Westeros, let me say that I don't necessarily think he was one of the worst Game of Thrones characters, but as far as parents go, he was a pretty bad one. The first clue was his tendency to be too loyal and too noble. You know how, in job interviews, they'll ask you to name your weaknesses and you'll try to be all charming with answers like that? In Ned Stark's case, there is nothing cute about being so loyal to his bff the king, but not nearly loyal enough to his family.

Yeah, we get it — it's the freaking king. But it's also your family, Ned, so like, come on. First, Ned agrees to go with him to King's Landing at the drop of a hat (er, knee), and then still goes through with his travel plans even though his young son, Bran, is in a coma and his wife, Catelyn, is all but begging him to stay. But he leaves for King's Landing, thus doing his part in setting into motion a tidal wave of events that eventually effected everyone.

True, we all make bad judgment calls as parents, but Ned Stark made one after another after another until his decisions made him literally lose his head, leaving his oldest daughter under Joffrey's sociopath thumb and his other daughter to roam the kingdom. First as a slave boy, and then as a killer. Good job, Ned.

Meanwhile, Bran is paralyzed, Rickon is M.I.A., Robb is dead, and Jon is dead (but soon to be alive again?). One might argue that it is because of Ned Stark directly that all of his kids kind of lost their sh*t and lost each other. So here we have the reasons why Ned Stark might very well be the worst parent on Game of Thrones.