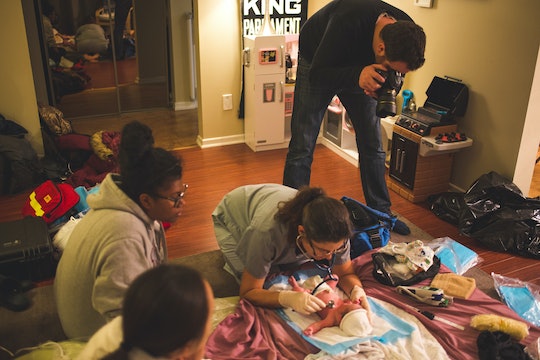 In case you weren't aware, choosing to have a home birth rather than a hospital birth is a personal decision. Of course, that doesn’t prevent folks from frequently asking all sorts of questions about home birth, including the most common: But...why?! That doesn’t mean that you're obligated to answer, and in fact, I don’t always wholly recommend doing so. I know that when I was researching the possibility of a home birth during my second pregnancy, most people wanted to know the reasons behind why I would choose to birth at home, and any answer I could give them never seemed to be enough. No, I did not want pain medication. No, I did not want interventions that would probably not be necessary. Yes, I lived closed enough to a hospital in the event of an emergency (which I ended up being transferred to in time to finish pushing out my very-stuck-in-my-vagina son).

Still, because home births are slowly on the rise, it’s important to discuss pregnant person’s motivations behind the practice, which many find to be rather antiquated. We’ve spoken to a number of women around the country who opted to give birth at home. Some were first timers while others were on their second, third, even fifth birth. They are of all ages, all backgrounds, and all willing to share their enthusiasm for the practice. Here's what they had to say about why they decided to give birth at home:

“For me, it was a spiritual thing. As a druid pagan, I try to follow the old path whenever possible. And part of that is having your child at home, with [no one] but the doula and the village women (or in my case, coven women) present.”

“I was sick of hospital births and the unnecessary interventions.”

“My first hospital birth was traumatic and almost ended in a c-section after 32 hours of labor. I had a friend who had birthed at home, so I decided to research it for myself. I was so happy with my first home birth that when I became pregnant with my third child, I knew that I would have him at home, too. I would have liked to have had my fourth at home, but it was logistically impossible.”

“I didn't have any indicators of risk, I come from a long line of healthy births, as soon as I found out I was pregnant I knew I wanted a homebirth. I don't dislike hospitals, I just think that they're unnecessary and a drain on an already over-worked system for me to be there for birth, which we are (in general) biologically programmed to do.”

“Because while I'm glad hospitals are there, birth is a natural process that doesn't require 99% of the protocols in hospitals”

“I chose a homebirth because I don't enjoy hospitals and nurses telling me what I'm allowed and not allowed to do from a legal standpoint and hospital policies instead of what's best for me and baby.”

“[I] felt it was the safest and most natural choice available.”

“I chose a home birth because my baby was literally being born and I didn't want to give birth in the car :)”

“God, so many reasons. I was definitely concerned about not only the c-section rates, but the very high intervention rates at most hospitals. I'm a person who is very uncomfortable with doctors in general, and I liked the idea of feeling safe and secure in my own home, surrounded by family and friends. I guess I wanted the intimacy of the experience. I also wanted to see what my own body was capable of, to a certain extent. I was picky about midwives and I always had a backup plan because I think safety is important and we should use the technology we have when we DO need it (and I ended up needing it) but I definitely felt like having the opportunity to birth outside of a clinical environment was important to me.”

“Traumatic primary caesarean, high chance of breech baby, and wanted a VBAC I didn't have to fight for.”

“My first birth was a hospital birth. Was a really negative experience. Impact many areas of me. Physically and emotional.”

“I chose a homebirth because it was a way to integrate the arrival of a new family member with the minimum amount of fuss. My province offers robust midwifery care with a clearly defined set of standards and scope of practice for home birth, which enabled me to make the confident decision that I was birthing with a high standard of care.”

“My personal philosophy views birth as a natural process that in low risk situations has a greater probability of being positive if it is handled as a private and sacred event.”