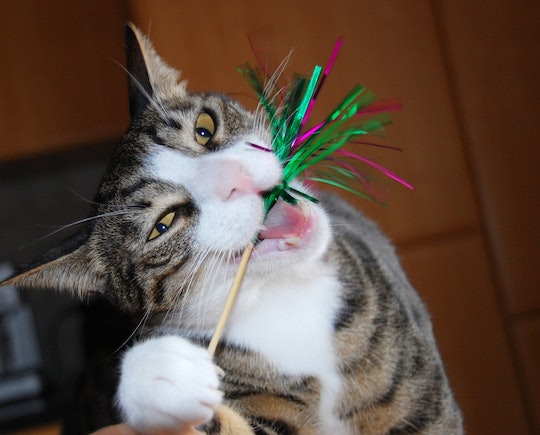 I have two cats. They were littermates, they're best friends and love my daughter more than anything on the planet. They're also tiny evil schemers intent on taking over the world one manipulating head scratch at a time. Just this morning, my cat, Kilgore Trout, saw that my other cat, Mrs Jellyby, was cuddled in his favorite spot behind my knees. It didn't end well for her, or my knees. Or my feather duvet that's now sprung a leak. That's why I'm considering what New Year's resolutions to make on my cats' behalf, because they need to shape up. I mean, they will fail miserably, but I'm considering a chart anyway.

I could easily make this a 17 part series about the failings and joys of the common domestic feline. Fun fact: My great uncle was a famous cat breeder and radio actor in New York City, and developed an entirely new breed of cat. He quite literally wrote the book on cats. So you could argue that my fanatical love of the feline is embedded in my DNA.

But that doesn't stop me from getting annoyed AF with my furry family members. Seriously, they are tiny predators. If they could, they would eat you. Since they can't, they knock crap off your counter instead. Death by 1000 cuts style. If they could make their own New Year's resolutions, the list would be short and sweet: 1. dominate the world. 2. lick your butthole. That would be the whole thing.