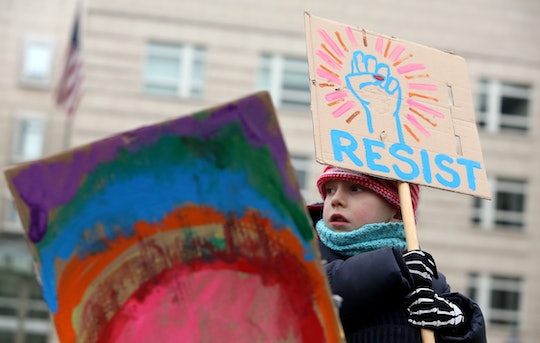 On January 21, 2017, the Women's March officially became the largest coordinated protest in our country's history. Since the OG march, women and their allies have been taking their grievances to the streets, using nonviolent resistance to condemn oppression. One of the most powerful things to see at these events? That would be babies and young children, the next generation of feminists and activists. These 15 sign ideas for babies for the 2019 Women's March are not only clever, but the perfect way to give your child their first taste of activism.

In my view, involving your little ones — yes, even the littlest ones — is one of the best gifts you can give them. Sure, they probably have absolutely no idea why they're at the march or what their sign means, but some of their earliest memories will be witnessing their parents take a stand for something they are passionate about. From day one, they'll learn about the importance of using their voice, and their vote, to create change. We may be the ones casting ballots and fighting for change right now, but the next generation will be taking over before we know it. Why wait until they're older to get them involved?

More Like This
40 Valentine's Day Outfits Your Girls Will Adore Showing Off This Season
13 Aquarius Baby Traits & How To Support Your Little Water Sign
Even If Your Baby Sleeps Better in Your Bed, It’s Still Not Recommended
32 Zippy Girl Names That Start With “Z”
What Parents Are Talking About — Delivered Straight To Your Inbox