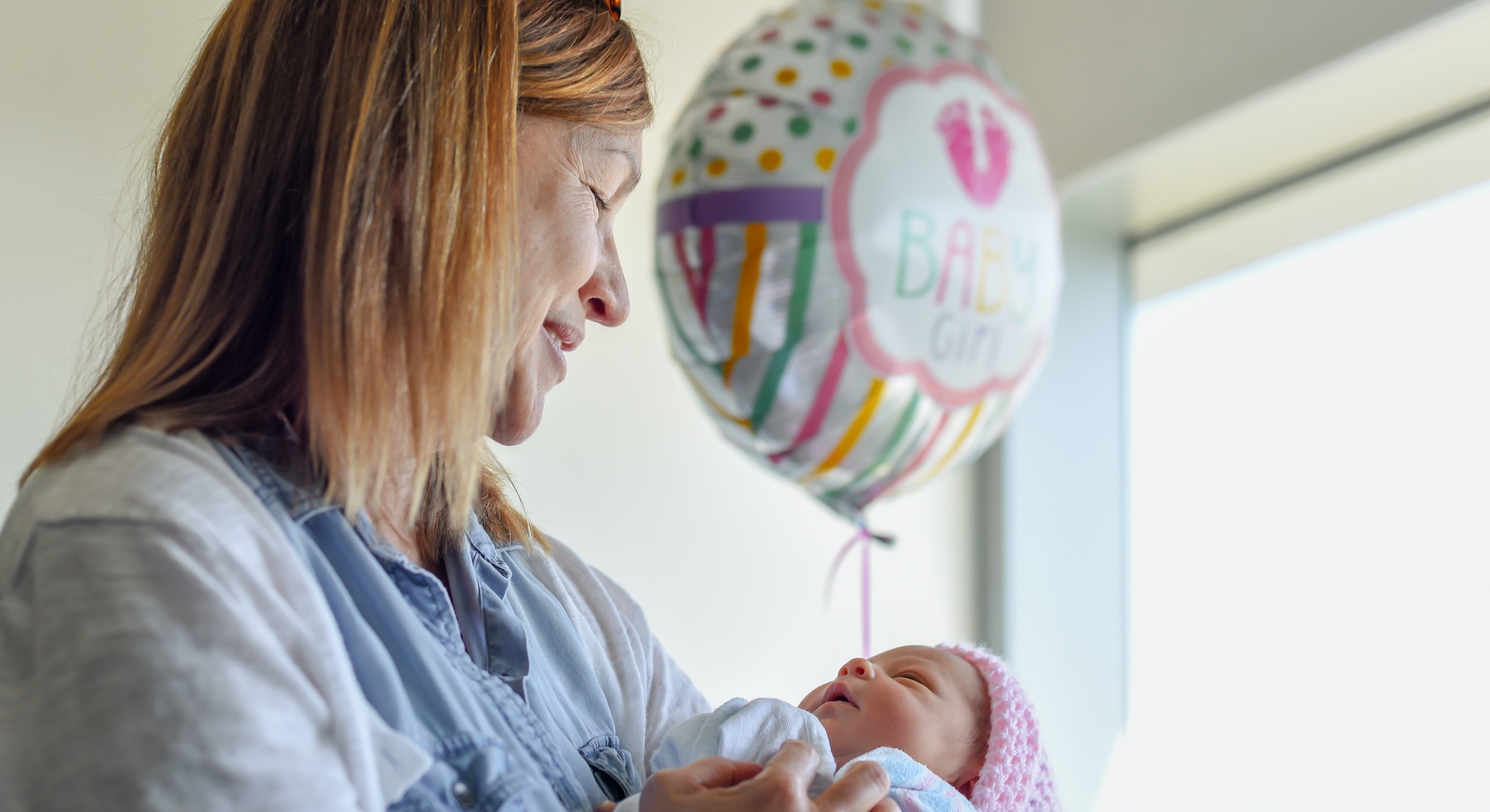 Having a child helps your family evolve in so many ways. Yes, you and your partner become parents, but your parents also become grandparents. Plus, they become parents of parents, totally changing your dynamic with them. That's why these birth photos of three generations are so meaningful; they capture the shift, marking the moment your family moves forward anew.

Grandparents aren't always in their grandchildren's day-to-day lives, but that doesn't mean they can't impact your kids each day. You might see your parents in your children's eyes or their stubborn streak. Or maybe you notice your parents' impact in the way you raise your children, as you choose which of their childrearing tactics to apply to your own kids. No matter how much time your kids spend with their grandparents, they'll be part of them, acting as one of the forces that shape the people they become because of how they shaped you. And there's something extra special about that bond when the grandparent can be there the day their grandchild is born.

Read on to see the connection three generations can share from the moment the third joins the bunch, and don't be surprised if they make you want to give your parents and your kiddo an extra hug.

A mom and daughter take a break from admiring the newborn in this photo by Erika Townend to smile for a once in a lifetime picture. A mom sits in a hospital bed following her baby's birth, while her mother stands next to her and holds the baby up to her face. Both mom and daughter grin, while the baby rubs its eyes.

In this photo by Ashbrook Imagery, a mom breastfeeds after her birth with who appear to be her sister and mother by her side. Mom sits in the middle, with her dressed pulled down and her newborn latched on as they nurse. Her mother is to the left of the frame, with her arms wrapped around her daughter, and her sister is towards the right, leaning her head against her sister's. All three look down at the baby with glee.

A new mom and two grandmas get a good look at the bundle of joy just added to their family in Hobbs Photography's shot. Mom is in her hospital bed, holding her infant to her chest and looking down. A crowd of family members stand next to her, with the two grandmas closest to the bed. Both have their heads tilted to the right as they gaze at the baby, emotion flooding their expressions. They seem like they can't take their eyes off of the newborn.

These three are glowing just a few hours after mom gave birth. Grandma holds the new baby, standing in front of a window with the sun shining down on her. She looks at the baby, and her daughter stands behind her, hugging her. She smiles at her mom, the bond of motherhood connecting them. Photo by Victoria Tiger.

This little one gets a good look at their mom and grandma in this photo by Momma KT Shoots. Mom holds their newborn in their hospital bed, while grandma leans her head against hers, smiling. The baby looks up serenely from their mother's arms, studying them both. They're locked in on one another.

6. The Moment It Happens

Grandma is part of the action in this photo captured by Ina of Birth is Beautiful. Mom has just given birth in the photo, her legs in stirrups and a grinning doctor holds the baby up for her to see. Dad hovers over mom's shoulder, and they both have ecstatic smiles on their faces. Grandma stands nearby as her grandchild enters the world, bearing witness.

7. And Then There Were Four

You can actually see this family expanding, with a dad and a grandpa at the center of the action. Meredith Claunch caught a grandpa bringing his newest grandchild over to where dad and his granddaughter sit. The little girl rests on her dad's lap, smiling at the camera as grandpa brings her sibling to her. Dad looks down at his kids, grinning widely.

Jessica Tapscott captured the epitome of a group hug in this Fresh 48 session. Mom hugs her baby to her, putting their head in the crook of her neck. Grandma wraps her arms around them both, leaning against her daughter and looking at the newborn, who snoozes happily. Grandma watches over them both.

A mom and grandma are overcome with emotion after a baby's arrival in Cradled Creations's photo. Grandma holds the newborn out, supporting their neck as she looks at them with an amazed smile. Mom sits in the bed nearby, wiping tears from her eyes with the hospital sheets. You can see tears flowing down grandma's face as well, as neither can contain their love.

Grandpa meets his grandchild in Corrina Holburn's photo. Grandpa holds the little one to his chest, his eyes glued to the baby. Dad stands next to them, holding a hand to his head in awe but keeping his eyes on his child. Their awe at the newborn shines through.

This photo wasn't taken at the baby's birth, but the photo of a great-grandma meeting her grandbaby's baby was too good not to include. New mom Emma holds her baby on her lap, while her grandmother sits across from the pair, gently holding the baby's feet. The baby looks up at her great-grandmother, and her attention is totally focused. You can almost feel the familial history they share. Photo courtesy of Emma.

12. Caught In The Moment

Casey Black snapped this shot of his wife, her mom, and their newborn when the little one was fresh to the world. Carson sits in a hospital bed, leaning against her mother. Grandma is sitting in the bed with her, and she holds the baby to her chest. Grandma smiles down at the infant in her arms while Carson grins at the camera.

Alyssa Baker captured two moms looking at their kids in this photo, and the generational bond between the three is clear. Mom lies in her hospital bed with her newborn on her chest, staring with her mouth open. Grandma stands next to the bed, leaning down to look at the pair. All eyes are on the baby.

A new mom gives grandma a glimpse of the view from mommy point in this photo by Virginia Simons. Mom is in her hospital bed just moments after birth, her legs still spread at the bottom of the frame. A birthing team member places the newborn on her chest, and grandma leans over her shoulder. Both women's faces are raised in matching soft smiles, their eyes locked in on the baby.

Grandpa's face sums it up in this photo by Breanna Kulmann. He's standing next to his son, who grins while holding his newborn. Dad is framed by grandpa and his brother, the three leaning together. While dad and brother smile, grandpa looks at the camera emotionally, almost as if he can't believe the way his family has grown.

Monet Nicole snapped this shot of a family's embrace just after the latest addition joined the group. Mom is on her hospital bed, with her baby lying on her chest, still covered in viscera. Her eyes are shut in emotion. Grandma leans into her, closing her eyes as she cries. Dad wraps his arms around them all, resting his hand on the newborn's back. They're a unit.

Edit note: This piece has been updated from its original version.