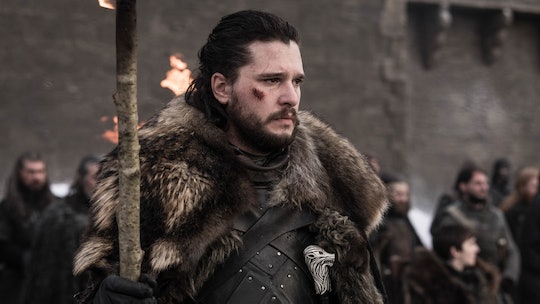 Game of Thrones is one of those shows that just has it all — romance, drama, action, terror, and even some laughs every now and then. It's relatable, it's quotable, and it's definitely GIFable (a word I believe I just made up). There are so many hilarious and clever Game of Thrones GIFs out there, and you'll want to have them all bookmarked for when you share your thoughts on the next episode on social media.

GOT has been on the air for eight seasons now, debuting in April 2011, according to IMDB. The show's characters have aged and grown and changed so much in the span of the show, making it extra fun to see their younger selves immortalized in GIF form. Little baby Arya, for example, was always a warrior at heart, and Dany has always been absolutely ruthless in pursuit of her birthright. No matter what twists and turns the end of the series brings, you'll probably find a GIF here that demonstrates your reaction (I'm expecting mine to be whole lot of number 16).

Here are 16 fun Game of Thrones GIFs to celebrate the highs and lows and wins and fails of our favorite Westerosi characters.