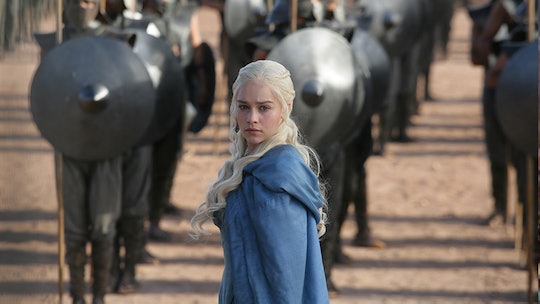 16 Signs You're The Daenerys Targaryen Of Your Group (Yas, Queen)

The events happening in Westeros on Game of Thrones was initially referred to as the "War of the Five Kings." Joffery, Stannis, and Renly Baratheon, Robb Stark, and Balon Greyjoy are all vying for crown and kingship following the untimely death of Robert Baratheon. But now, depending on whether you go by the books or show, only one or maaaybe two of the original five kings remain. One contender, one no one really counts on in the Seven Kingdoms, is still very much in the running: Daenerys Targaryen, the First of Her Name, Queen of Meereen, Queen of the Andals and the Rhoynar and the First Men, Lord of the Seven Kingdoms, Protector of the Realm, Khaleesi of the Great Grass Sea, called Daenerys Stormborn, the Unburnt, Mother of Dragons. *whew*

Well... is she still Queen of Meereen? She left amid quite the kerfuffle. And she's in the Great Grass Sea now, and the Dothraki approaching when last we saw her didn't appear to be too keen to call her Khaleesi. And she only has one of her three dragons, so can she be called Mother of Dragons? Mother of Dragon, singular, is perhaps a bit more accurate at this point. But, if one lesson must be taken from our Dany, it's that no matter how far past the point of no return she seems to venture, you never, ever count her out. The woman walked out of a funeral pyre. That is, as the kids would say, hardcore.