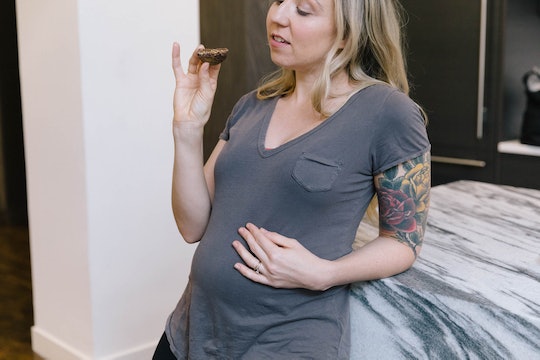 Like most moms-to-be, I left my first prenatal appointment with a list of foods to avoid during pregnancy. Most of the "suggestions" seemed reasonable. I mean, I'm relatively sure no one should drink raw milk or eat raw shellfish, pregnant or not. Others — like cutting out soft cheese and runny eggs — seemed unfair. So, yeah, I ate some foods I was told to avoid during my pregnancy. I'm not alone, either. I asked other moms to admit to the food they still ate during pregnancy that was officially off-limits. Look, a pregnant woman can only handle so much, people.

There are foods you should skip or limit during pregnancy for some pretty legit reasons, according to the March of Dimes. Things like raw or rare meat, deli meat, raw fish, soft cheeses, and raw milk can make you sick, resulting in illnesses like salmonella, toxoplasmosis, and listeria, which not only dangerous for you but can cause miscarriage or other pregnancy complications. And other foods and beverages, like certain types of fish or drinks containing alcohol, can cause developmental delays in your baby, according to the Cleveland Clinic. The American Congress of Obstetricians and Gynecologists recommends limiting caffeine to 200 mg a day, which is only one cup of coffee, you guys.

For the record, I'm definitely not advocating you going against your doctor's orders. I will, however, let you in on a little secret: it's entirely up to you. People still have bodily autonomy after they get pregnant. So while I think it's smart to follow diet recommendations made by experts and doctors, it’s also none of my business if a pregnant woman drinks four lattes a day, orders sushi, or has an occasional glass of wine. If they decide to eat strange, gross, or seemingly unhealthy things while pregnant, that's their choice. I pretty much always recommend that people follow their doctor's advice, but if they choose not to, I won't judge them. Besides, that would be pretty hypocritical of me, since I'm the woman who survived on fried carbs, sour candy, and Diet Coke during her last two pregnancies. What? I simply couldn't keep anything else down.

Read on for some real-life moms, making real-life confessions about eating foods during pregnancy that were totally against the rules. Just try to keep your judgement to a minimum.

More Like This
Is Raspberry Leaf Tea Safe To Drink During Pregnancy?
22 Valentine's Day Pregnancy Announcement Ideas Sweeter Than Candy
25 Cookie Recipes Without Eggs That Are *Still* Delicious
Guys, We Need To Talk About Pregnancy Farts
What Parents Are Talking About — Delivered Straight To Your Inbox