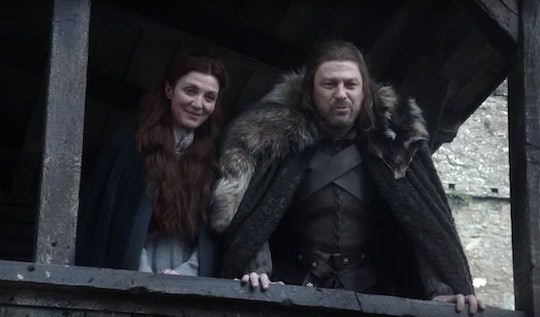 I became a parent right around the time I started binge watching Game of Thrones for the first time, and I now believe that the two events happening at the same time was no coincidence. When you think of everything Game of Thrones is about, you see right off the bat some of the parental themes that are pretty clear even before the story begins. (Fair warning: From here on out, spoilers and theoretical spoilers abound. You have been warned.) We've got the whole R+L=J scenario that, like I said, is a parental lineage theory that involves lore from way back before the story we see even started. Luckily, we'll likely be getting some of this juiciness once the new season of GoT begins, but that's another story.

Cersei's only claim to decency is her fierce loyalty to her children, Jaime is insistent on being the rightful father of Myrcella (too little much too late, I know), and then we've got Stannis and his whole true love for his daughter-turned-sacrifice. The theme of parent-child relationships are pretty much everywhere we look in Game of Thrones, and I'm not just saying that because I'm now a parent myself.

Even the big players like Tyrion have daddy issues (which, OK, who the Hell wouldn't with Tywin as their dad?), and Ramsay is only a little obsessed with being legitimized by his dear old dad. Again, another of couple winners right there.

But it's because of all of the parental themes in Game of Thrones that parents who watch it are actually the best kind of parents. We're learning what not to do as we raise our kids. Like, oh I don't know, burning them at the stake or arranging their marriages to psychopaths. Really, though, there are plenty of lessons to be learned as a Game of Thrones fan who doubles as a parent, and again, I swear I'm not just reaching because I have a kid of my own. This is totally legit.