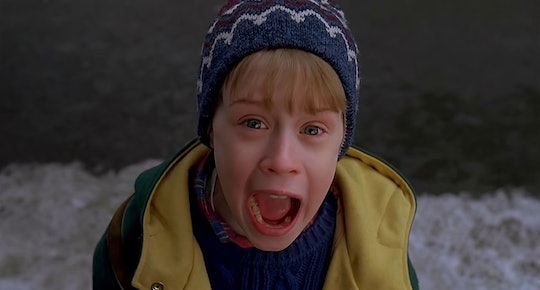 22 Things I Noticed While Rewatching 'Home Alone' As An Adult

Home Alone is a Christmas movie, but really, it's one of those '90s movies that have survived well beyond the years of acid wash jeans and fluffy bangs and can be enjoyed all year round. But the things you notice when you rewatch Home Alone as an adult are things that can't be unseen, no matter how hard you try to suspend your disbelief. I know that this is supposed to be the most precocious kid ever and that his antics are seen as adorable and inventive, but when you grow up and watch Home Alone, you kind of stare at the McCallisters in disbelief in pretty much every scene.

And if you're a parent watching Home Alone, you also tend to see everything that is kind of insane about the movie. Not exactly unrealistic, but things that you can't help noticing now that you have a few maternal bones in your body. When I watched Home Alone for the first time this holiday season, introducing my toddler to the ingenuity of a booby-trapping expert kid of eight years old, it was a totally different experience.

I don't know if my eyes are opened wider because I'm an adult or because I'm a parent, but you tend to notice things when you watch Home Alone and you're no longer a kid yourself.

1. Buzz Verges On Being Cruel To Kevin

I totally get the repertoire between an older sibling and a younger, more annoying one, but come on. Right from the start, Buzz, who's like eight years older than Kevin, treats him like garbage.

2. Kevin Is Kind Of Terrible

As a mom, I can't get behind Kevin back-talking to his mom and stomping his feet when he doesn't get his way. But the rebellious kid in me kind of loves the fact that an eight-year-old can hold his own when talking smack to his mom about hoping his family is gone when he wakes up. Because you know from witnessing your own multitude of tantrums that he doesn't really mean it.

3. But Terribleness Runs In The Family

No wonder Kevin wished his family would disappear, because have you met them? Half of them ignored him totally and the other half were always on his case. He might not be the easiest kid, but he's also the youngest kid in an obviously wealthy family. (Have you seen their house?) So you know those parents have spoiled him up until this point. He's a product of his own environment.

4. Why Couldn't Each Adult Account For Their Own Kids?

Uncle Frank and his wife have Fuller (the bed-wetter), and maybe another kid or two and Kevin's parents have their own kids. If each set of parents had looked after their own kids when getting ready to go to the airport, maybe this whole mess could have been avoided.

5. Kevin Has More Siblings Than You Realize

Since Buzz is kind of the worst out of Kevin's siblings, you don't realize until later, when he sadly talks to the family photo, that there are more siblings you probably didn't realize are his. He actually has another brother, the red-headed kid, and two older sisters, one of which is the girl who called him incompetent in French. No wonder he wished her away.

6. Uncle Frank Is The Worst Villain In The Whole Movie

OK, he might not be as bad as home invaders who threaten to bite off Kevin's fingers one by one, but Uncle Frank is so mean to his eight year old nephew that it's a wonder how he has his own children. If my brother ever talked to my kid like that, no matter how much of a pain my kid was being, it wouldn't fly. What the heck, Mom and Dad McCallister?

7. Uncle Frank Is Also The Biggest Mooch Ever

In the beginning of the movie, you learn that their relatives in France are paying to fly them all out there for Christmas. Then, Frank gets himself out of paying for any of the pizza, on multiple occasions. Seriously, this guy is the worst.

By this point in Home Alone, it's clear how much of a tool Buzz is. And instead of being a good brother and saving food for Kevin, he literally shoves Kevin's slice of pizza into his mouth right in front of everyone and then pretends to puke it up.

9. Kevin's Dad Might Be More Neglectful Than His Mom

There aren't really any moments in Home Alone when Kevin's dad is super present as a father. It's his mom who remembers that they forgot him in the first place and she's the one who is adamant about getting home before anyone else, so she can be there with him.

When Harry, posing as the police officer, asks if they are taking precautions for their home's security, Kevin's dad says that they have locks on the doors and light timers because "that's about as much as you can do these days, right?" (or something like that). But no, that's not all that can be done, because you're rich and live in a rich neighborhood. Get an alarm system.

11. It Actually Gets Kind Of Sad

When Kevin is sleeping in his parents' bed, obviously missing them, and then talking to their family photo, saying he didn't mean what he'd said before, it gets you right in the feels.

12. The Gunshots From The Mob Movie Should Not Sound So Real

One of Kevin's tactics in scaring away Harry and Marv is playing his mobster movie, Angels With Filthy Souls, to fool them. But those gunshot sounds in a movie should not sound so realistic that they scare away the pizza delivery guy and later, Marv.

13. Those Booby Traps Would Have Killed The Wet Bandits

Let's take a tally here. There are the paint cans slamming into their heads, falling down icy cement stairs multiple times, being smashed in the face with an iron, and having a blowtorch literally singe skin off one of their heads. How did none of this kill the Wet Bandits?

14. At Least Marve Considered Leaving The House Alone With A Kid In There

There was one point, when they realized that Kevin was home alone, that Marv questioned coming back in the evening since there was a kid there. But Harry brushed over it and his partner never brought up any concerns again. And then eventually, he gets his tarred feet impaled with nails. You know what they say about Karma.

15. Why Didn't Kevin Call The Cops Or Find An Adult?

The day of the big heist, when Kevin sees the Wet Bandits outside of his house planning to return later, he says quietly, "Where are you, Mom?" So obviously at this point he's scared, and now would be the time to call the police or talk to literally any adult, but he doesn't. Why?

16. The Wet Bandits Are Way Too Determined For This One House

After being mutilated, burned, tarred, and feathered, Harry and Marv still insist on breaking into the house and eventually, getting Kevin. Of course, eventually, it becomes just about revenge, but they were seriously way too determined to hit up this one house.

During one of their attempts to break into the house, one of the bandits stick their head in the doggy door. First, he would never fit the rest of his body, so why? And also, why is there even a doggy door at a house where no dog or cat has been seen or mentioned?

18. There Is No Way The Entire Block Was On Vacation

I know that's the whole premise, and that all of the neighbors are going on vacations too, which is why Kevin wouldn't be able to get any help from them, but come on. There's no way they all left town for the week.

19. That Homemade Zipline Though

I can't even with that homemade zipline from the attic to the tree house, made possible with the handlebar of a bike. Kevin's creative, I'll give him that.

20. Suddenly These Bandits Are Child Torturers?

By the time the Wet Bandits finally catch up with Kevin, they're ready to torture him right back, and as Harry says, they want to start by biting off the kid's fingers. Because that's normal. (Please note the sarcasm.)

21. How Is Kevin Still Home By Himself After The Wet Bandit Ordeal?

The creepy-not creepy neighbor ends up taking Kevin home, so the cops don't end up seeing the kid go home alone, but why does the old man just leave him there by himself again? Isn't it obvious by that point that the kid gets into too many hi-jinks when he's left to his own devices?

22. You Should Never Watch Home Alone As A Parent

I can handle Kevin's disrespect with his parents and I can even handle the poor parenting on their part, but eventually, the movie gets legitimately sad. And when I watched Kevin and his mom hug on Christmas morning, I think someone was cutting onions in my living room.

The big takeaway here is that Home Alone can be enjoyed year-round, but if you're an adult, prepare to be a lot more skeptical than you were as an innocent, care-free child. And if you're a parent, prepare to cry. Big time. Because that's just how it goes when you have your own kid — the thought of them being left home all alone is bound to send your protective instincts into overdrive.