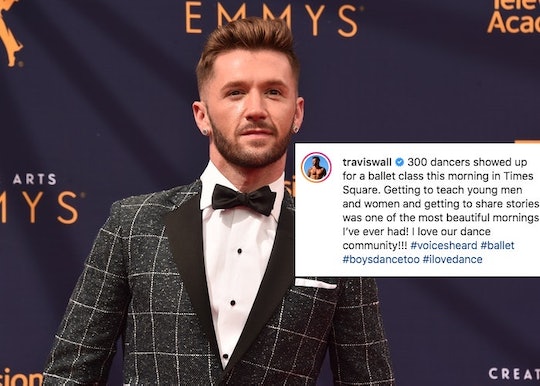 It's 2019, and the years of gendered extracurricular activities should be decades behind us. However, after a recent segment during which Good Morning America's Lara Spencer mocked Prince George for taking — and reportedly loving — ballet, 300 dancers had an inspiring ballet class in Times Square, sending a powerful and beautiful message that #BoysDanceToo.

On Monday, Travis Wall, a renowned choreographer for So You Think You Can Dance, took to Instagram to share a video of a massive group ballet class, which included hundreds of men and women, as well as boys and girls, outside the Good Morning America studios in New York City. "300 dancers showed up for a ballet class this morning in Times Square. Getting to teach young men and women and getting to share stories was one of the most beautiful mornings I’ve ever had! I love our dance community!!!" he captioned the video.

The inspiring moment unfolded just days after Spencer mocked Prince George's interest in ballet during a segment of Good Morning America that discussed the future king's primary school curriculum, which reportedly includes courses such as mathematics, geography, computer programming, poetry, and ballet. Of the lattermost point, Spencer commented that Prince George's father, Prince William, has previously said his oldest son "absolutely loves ballet," to which she replied through laughter: "I have news for you Prince William, We’ll see how long that lasts."

Spencer's comments were swiftly met with backlash. As one parent tweeted, "On behalf of my amazing ballet-trained son, more fit and athletic than you’ll EVER be, please STOP ridiculing things you have no knowledge about. Thank goodness he hasn’t had useless people like you in his life!" The hashtag #BoysDanceToo also quickly went viral, furthering the conversation about why such comments are harmful and only further antiquated gender stereotypes and a culture of toxic masculinity.

In response to the mounting backlash and criticism, Spencer has issued two separate apologies — one on social media on Friday and one on air, which happened on Monday, Aug. 26.

"I screwed up, I did," Spencer said on Good Morning America. "The comment I made about dance was stupid and insensitive and I am deeply sorry." Spencer added during her apology that she's "spoken with several members of the dance community over the past few days," including Wall as well as Robbie Fairchild and Fabrice Calmels. "I have listened. I have learned about the bravery it takes for a young boy to pursue a career in dance," Spencer said.

Romper's request for further comment from Good Morning America was not immediately returned.

The massive ballet class led by Wall outside of Good Morning America's studio was truly incredible and moving to see. This powerful community rose up to defy outdated gender norms and reiterate that everybody can enjoy practices such as ballet, and people on Instagram absolutely loved how they delivered their message.

"On behalf of a mother of two boys that danced, thank you!" one parent commented on Wall's video. Another wrote, "Doing such wonderful work healing our world one movement at a time! Love this so much!"

As this conversation continues, it's important for everyone, not only parents, to call out harmful commentary and behavior that impacts children. But educating others with powerful messages, like Wall has, is a vital part of crushing gender stereotypes and supporting every child's passions.