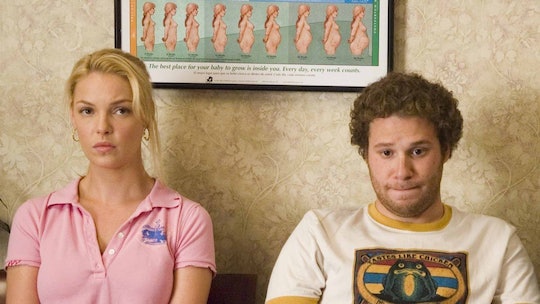 Now, I'm no mind reader or anything, but I'm fairly certain my boyfriend wasn't trying to annoy me during my first trimester. It's now years later, and I still have to remind myself of that fact when I think back on the first few months of my pregnancy. I'm beyond certain that my boyfriend was doing everything in his power to make me feel as comfortable, supported, confident, and entertained during my pregnancy. And yet, whether intentional or not, I realized there are some annoying things your partner will do when you're in your first trimester, regardless. Yes, even if he does hilarious little bits with your cat to make you laugh, and does literally any errand or task you ask him to, and refuses to judge you for eating ungodly quantities of chocolate and thai takeout. You know, for example.

But given that I was a hormone sundae and that I was struggling to mentally comprehend the short- and long-term changes that were befalling every square inch of my life, I was primed to be annoyed. So, you k now, I frequently was. There was probably at least a little bit of a subconscious "you did this to me and this is your fault" thing going on when I would find my boyfriend particularly irritating during my first trimester, but bless his heart, it was honestly a matter of proximity. I was puking, worrying, not sleeping well, and I couldn't really blame the rapidly multiplying ball of cells in my uterus, so my boyfriend was the next closest party to be annoyed with.

The list of things he did that annoyed me is long enough to encircle the sun, and most of it was admittedly not super justified. But some of it really, really was. Here are some of the most annoying things he did that no one with a pregnant partner should ever, ever do.