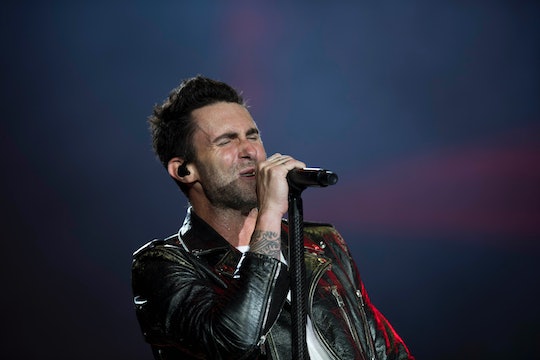 Adam Levine was born to be a parent. At least, that's the impression you'll get when you hear what the Maroon 5 frontman and his wife, Behati Prinsloo, have to say about growing their adorable little family. The couple announced last week that their 1-year-old daughter Dusty Rose will become a big sister soon, as Prinsloo is pregnant again. And these Adam Levine quotes about fatherhood show that he could not be more psyched to welcome another daughter or a son into their happy brood.

And given Levine's enthusiasm about fatherhood, it could not be more apparent that the Victoria's Secret Angel is the perfect partner and co-parent for him. The two married in 2014 after two years of dating, and to say they've been thrilled about being parents since welcoming Dusty Rose in September 2016 would be a bit of an understatement. Here's what Prinsloo had to say about the experience in an August interview with People:

I think for both of us, we're just so obsessed with being a family and having a family — seeing this next step in our life. [Levine]'s such an incredible dad, and so excited to see her grow up. It's so awesome.

As for Levine, well, it's clear from pretty much every public comment he's made about parenting that he simply could not agree more.

On How Many Kids He Wants

Some couples are the one and done types; others may plan on having a brood of five or six. A rare few parents decide to go full-on like the Duggars, having as many kids as nature allows. And then there's Levine, who wants to surpass even the mind-bogglingly large tribe that is the 19 Kids and Counting family. At least, that's how he felt about six weeks after getting married in 2014, when he told Ryan Seacrest that he wanted to have tons of kids:

Well, the 38-year-old singer is about to be a father of two, so he's... on his way? Even if he and Prinsloo don't end up having quite that many sons and daughters, it's pretty obvious that Levine will be a seriously awesome dad to all the kids he does have.

On Learning As He Goes

But once he did become a dad for the first time, Levine found out that even having just one baby was a major learning experience. A couple years after telling Seacrest that he wanted 100 kids, he updated the radio and TV personality about what it was like for him to actually get started on growing his family:

I've been a parent for three weeks; what do I know? I don't know anything, but it's kind of part of the beauty of it, honestly. There are a lot of instincts, a lot of things that kind of kick in and switch on. It's a beautiful experience.

On His True Purpose In Life

She will be loved, indeed! Shortly before Dusty Rose's birth, Levine told Entertainment Tonight that pretty much everything in his life was just fluff in comparison to gaining the title of "dad:"

Spoken like a dad who was truly whipped by his daughter before he ever even met her.

On How Good He Has It

Levine undoubtedly worked hard to earn the star on the Hollywood Walk of Fame he recently earned. But such accolades for his impressive career as a rock star are far from the best or most rewarding thing he has going for him. Here's what he had to say when he secured the star back in February, according to a Variety video of the ceremony:

I have a daughter, I have the most beautiful wife in the entire world. I am one of the luckiest people who has ever lived and it has nothing to do with me. It has to do with the people who love me the most.

Well, sheesh. Could he get any cuter?

On The Greatest Joy In His Whole Entire Life

As if that weren't enough, Levine wasn't done gushing the next month. In an appearance on The Tonight Show, he told host Jimmy Fallon that he was engaged in a one-man mission to ensure that "Dada" would be his daughter's first word — and that he was having a blast in pretty much every aspect of parenting, as well:

[Fatherhood is] so fun. I do new stuff all the time, and it’s constantly entertaining. It's the greatest thing in the world.

And that pretty much encapsulates everything you need to know about how much Levine adores his family and being a dad. If he's not careful, his head might explode from excitement when baby No. 2 arrives.